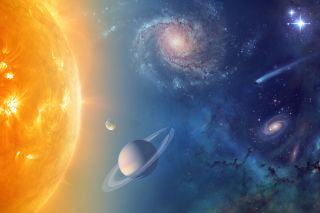 With a mounting number of planets being discovered outside Earth's solar system, expanding humanity's understanding of the geography of the universe, three leaders in the field of exoplanet science have been named to Time magazine’s annual list of the 100 most influential people.

Planet-hunters Natalie Batalha, Michael Gillon and Guillem Anglada-Escudé were recognized by Time magazine for notable contributions to NASA’s planet-seeking Kepler mission and the discovery of potentially Earth-like worlds in the TRAPPIST-1 system and around Proxima Centauri, the sun's nearest stellar neighbor, according to a statement from NASA.

"It is truly exciting to see these planet-hunters among the other movers and the shakers of the world," Paul Hertz, director of NASA's astrophysics division, said in the statement. "These scientists have transformed the world’s understanding of our place in the universe, and NASA congratulates them for their well-deserved recognition." [The Strangest Alien Planets (Gallery)]

Batalha is the current lead scientist for NASA's Kepler Space Telescope and the first woman at NASA to receive the Time 100 designation, according to the statement. The Kepler mission is dedicated to finding Earth-like worlds beyond our solar system that orbit within the "habitable zone" of their parent star, or the region where liquid water could potentially exist on the planet's surface. Since its launch in 2009, Kepler has found more than 2,500 confirmed exoplanets, according to the statement.

Gillon, a scientist from the University of Liège in Belgium, led the research team that detected seven Earth-size planets around TRAPPIST-1 — an ultra-cool dwarf star approximately 40 light-years away from Earth.

The seven exoplanets are most likely rocky worlds the size of Earth or smaller, and "some of the best targets for NASA’s upcoming James Webb Space Telescope to look for signs of habitability," according to the NASA statement.

Last year, Anglada-Escudé of Queen Mary University of London discovered Proxima b, a potentially Earth-like world orbiting Proxima Centauri — Earth’s closest neighboring star located just over four light-years from the sun. Proxima b also orbits within the habitable zone of its star, meaning it could have the right surface temperature to allow for the presence of liquid water and, in turn, possibly support life, scientists say.

"I'm honored to be part of the Time 100 and feel strongly that recognition belongs to the entire team of scientists and engineers who opened our eyes to the large number of potentially habitable worlds that populate the galaxy," Batalha said in a statement from NASA. "Searching for potentially habitable worlds makes one appreciate just how precious living worlds are. I hope that the discoveries from the Kepler spacecraft inspire people to learn more about other planets, and, in turn, make us love this one all the more."