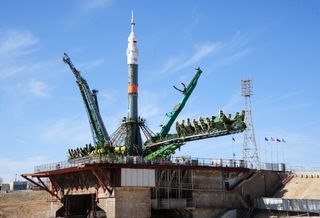 The Soyuz rocket and spacecraft set to launch NASA astronaut Jack Fischer and Russian cosmonaut Fyodor Yurchikhin to the International Space Station on April 20, 2017 is seen at the launchpad at Baikonur Cosmodrome, Kazakhstan.
(Image: © RSC Energia)

An American astronaut and Russian cosmonaut will launch on a fast-track mission to the International Space Station (ISS) early Thursday (April 20), and you can watch the action live online.

The Russian-built Soyuz spacecraft carrying NASA astronaut Jack Fischer and Russian cosmonaut Fyodor Yurchikhin is scheduled to blast off at 3:13 a.m. EDT (0713 GMT) from a pad at Baikonur Cosmodrome in Kazakhstan, where the local time will be early afternoon at liftoff. The Soyuz should take about 6 hours to reach the space station, NASA officials said in a statement.

Fischer and Yurchikhin will join the three crewmates already aboard the space station to round out the outpost's Expedition 51 mission crew. The two new crewmembers' Soyuz should dock at the station at 9:23 a.m. EDT (1323 GMT), NASA officials said in the same statement.

"Two happy guys & a whole bunch of spring blooms!" Fischer wrote in a Twitter post alongside a photo of him and Yurchikhin. "#SoyuzMS04 Crew is ready to launch tomorrow!"

Thursday's launch will mark the first spaceflight for Fischer, 43, a U.S. Air Force colonel from Louisville, Colorado, who has degrees in astronautical engineering along with aeronautics and astronautics. He joined NASA's astronaut ranks in 2009 and has two daughters with his wife, Elizabeth.

Yurchikhin, 58, is a veteran cosmonaut making his fifth spaceflight with the Expedition 51 mission. A father of two with wife, Larisa, Yurchikhin is from Batumi in the country of Georgia and was selected to join Russia's cosmonaut ranks in 1997. He has flown on one NASA space shuttle flight to the ISS, as well as three long-duration missions to the orbiting laboratory.

Once they arrive at the ISS, Fischer and Yurchikhin will join NASA astronaut Peggy Whitson, cosmonaut Oleg Novitskiy and French astronaut Thomas Pesquet of the European Space Agency. The crewmembers will spend more than four months living and working in space, and are expected to return to Earth in early September, NASA officials said.