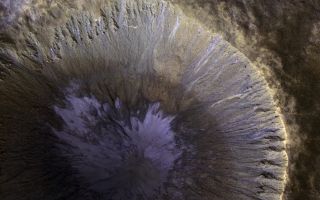 NASA's Mars Reconnaissance Orbiter captured this image of a gully-streaked crater in the Red Planet's northern hemisphere on Jan. 15, 2017.
(Image: © NASA/JPL-Caltech/Univ. of Arizona)

Gullies streak down the slopes of a frosty Red Planet crater in a gorgeous new photo by NASA's Mars Reconnaissance Orbiter (MRO).

MRO captured the image using its High Resolution Imaging Science Experiment (HiRISE) camera, which can spot features as small as a coffee table on the Martian surface.

"This is the location with the most impressive known gully activity in the Northern hemisphere," HiRISE principal investigator Alfred McEwen, a professor of planetary geology at the University of Arizona, wrote in an image description yesterday (April 18). The location he was referring to is about 51.7 degrees north latitude and 333 degrees east longitude, according to the description. [See more great Mars photos by MRO]

"Gullies are active in the winter due to carbon dioxide frost, but northern winters are shorter and warmer than southern winters, so there is less frost and less gully activity," McEwen added.

Therefore, the crater's gullies are quite different from the dark streaks known as recurring slope lineae (RSL) that temporarily stain some slopes near the Martian equator during the warmest parts of the year. Some scientists posit that RSL are signs of salty liquid water, but others point to dry landslides as the likely cause.

Though NASA released the gully-crater image yesterday, HiRISE actually took it on Jan. 15.

The $720 million MRO mission has been circling Mars for more than 11 years, studying the planet's geology and climate, searching for signs of liquid water activity, and scouting out possible landing locations for future robotic and crewed missions, among other tasks. MRO also serves as a communications relay link between robots on the Martian surface, such as NASA's Opportunity and Curiosity rovers, and their handlers back on Earth.

MRO and its instruments remain in good shape despite the spacecraft's relatively advanced age, NASA officials have said.