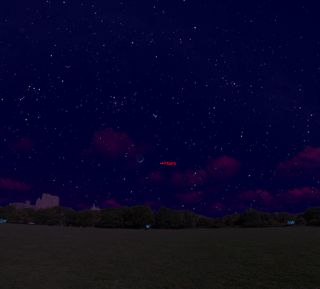 A fading Mars will be visible in the western sky just after sunset on March 30, 2017. You can use the cresent moon as a guide to find the Red Planet.
(Image: © Starry Night)

If there were ever a "maverick" among the planets visible to the naked eye, that title would certainly go to Mars.

Consider this: In 16 months, Mars will come within 35.8 million miles (57.6 million km) of the Earth, the closest it has been to us since August 2003 and it will not be this close again until September 2035. In midsummer of 2018, Mars will appear more than 3.5 times brighter than Sirius, the brightest star in our night sky. Mars will even rival Jupiter in brilliance. In fact, Mars will rank as the third brightest nighttime object behind the moon and Venus.

But that all happens 16 months from now. At this moment in time, Mars is on the other side of the brightness spectrum. Tonight (March 30), look for the Red Planet low in the western sky about 45 minutes after sunset. [See the Brightest Planets in This Month's Night Sky]

You'll be able to use the moon as your benchmark in order to make a positive identification of Mars Certainly, the moon will likely be the first object you'll see in the rapidly fading evening twilight. Nearly three days past new phase, the moon will appear as a narrow sliver of light, just 11-percent illuminated. After you've found it, look about 7 degrees to its right and (weather permitting) you'll see Mars appearing as a yellowish-orange, though by no means outstandingly bright star.

Your clenched fist covers about 10 degrees of the night sky when held out at arm's length, so the moon and Mars will be separated by roughly three-quarters of a fist tonight.

But don't expect the eye-popping object that will adorn our skies in the summer of 2018. Right now, Mars is much farther away from us at a distance of 207 million miles (333 million km). So Mars will appear only about 1/50th as bright as it will 16 months from now. In fact, by virtue of it currently shining at magnitude +1.5 on the brightness scale used by astronomers , Mars is now about to drop in rank to the category of a second magnitude object.

Both Mars and the moon will remain in the western sky for about three hours after sunset. Mars in fact is practically midway between two other noteworthy sky objects.  Well above and slightly to its left of is the famous Pleiades star cluster.  At 45 minutes after sunset, the sky might still be too bright to see them readily with the naked eye, so you'll probably need binoculars. But after another 45 minutes have passed the sky will have darkened sufficiently so that you should readily be able to identify them.

And a similar distance below Mars but a bit off to the right and much lower to the west-northwest horizon will be Mercury, glowing at magnitude -0.4 and currently appearing almost six times brighter than Mars.  Mercury, the so-called "elusive planet," is currently in the midst of its most favorable evening apparition for 2017.

As for Mars, it will continue to be evident as an evening object for at least another month or so, but as we move into May, it will begin setting less than two hours after sunset and will become increasingly more difficult to see.  It will become lost in the bright sunset glow in June and will then go on a “summer sabbatical” of sorts as it transitions into the morning sky, eventually reappearing later this year to set the stage for its gradual return to prominence in 2018.

Editor's note: If you snap a great photo of Mars and the moon together and would like to share it with Space.com for a story or photo gallery, send in images and comments to: spacephotos@space.com.