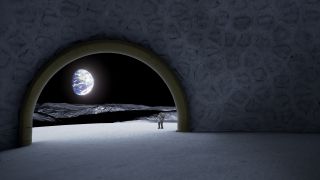 View of Earth from inside the moon temple. (Earth is upside-down because the moon temple would be located at the lunar south pole.)
(Image: © Jorge Mañes Rubio/DITISHOE)

European Space Agency (ESA) artist-in-residence Jorge Mañes Rubio has drawn up plans for a "moon temple" that would help meet the spiritual, social and psychological needs of lunar settlers.

Those needs will likely be considerable, given that the pioneers will be isolated from the rest of humanity on a world hostile to life as we know it, Rubio said.

His vision involves building a dome on the edge of Shackleton Crater, which is 13 miles (21 kilometers) wide and 2.6 miles (4.2 km) deep. Shackleton is a prime candidate for a future lunar outpost, experts have said; the crater lies at the moon's south pole, and its permanently shadowed depths are thought to harbor large amounts of water ice. [Visit the Moon Temple: Jorge Mañes Rubio's Lunar Art in Pictures]

But the peaks along its rim enjoy nearly constant sunlight — a fact that explains the title of Rubio's project (which will be available next month as a free app): "Peak of Eternal Light."

The temple's interior would feature a large communal area akin to the agora of ancient Greek city-states, where settlers could chat, put on plays and perform other activities. At the center of this space would sit not an altar but a highly capable telescope (ideally employing an advanced mirror of liquid metal that could be brought to the temple in a bottle), Rubio said.

So the structure would be a multipurpose building, a temple more in the "primitive" sense than the modern one, he said. Indeed, Rubio said he drew inspiration from many archeological sites, especially El Caracol, part of the Chichen Itza pre-Columbian Mayan complex in Mexico.

"It was a temple but also an observatory," Rubio told Space.com. "I really like that idea, so I think I wanted to kind of reinterpret, or reimagine, what El Caracol could be on the moon."

There is great value in making, or strengthening, such a link, he said.

"Early civilizations had a deeper connection with the cosmos, and they had a deeper connection with nature. Somewhere along the way, we lost that connection," he said. "I really hope that we can get it back. And when I look at the moon, that's what I feel: There are no borders, there are no nations there, there's nothing to divide us — religion, whatever. The moon is a mythological symbol of unity for all mankind."

The lunar temple would also feature an "oculus" through which people could observe the Earth. The planet would be visible every two weeks from Shackleton's rim. (Earth is in sight 24/7 from some other locations near the lunar south pole, but such constant visual contact would probably not be in the best interests of an outpost striving for permanence and self-sufficiency, Rubio said.)

"Peak of Eternal Light" is an art project, not an ESA engineering plan. But Rubio said he would love to see the temple make its way to the moon, if not as a functioning piece of an active lunar colony, then perhaps as a sort of monument to human ingenuity, curiosity and unity.

"Definitely, I would like to create something there," he said.