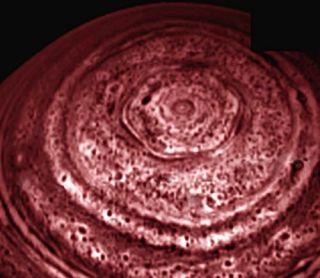 A bizarre six-sided feature encircling the north pole of Saturn near 78 degrees north latitude has been spied by the visual and infrared mapping spectrometer on NASA's Cassini spacecraft.
(Image: © NASA/JPL/University of Arizona)

One of the most bizarre weather patterns known has been photographed at Saturn, where astronomers have spotted a huge, six-sided feature circling the north pole.

Rather than the normally sinuous cloud structures seen on all planets that have atmospheres, this thing is a hexagon.

The honeycomb-like feature has been seen before. NASA's Voyager 1 and 2 spacecraft imaged it more than two decades ago. Now, having spotted it with the Cassini spacecraft, scientists conclude it is a long-lasting oddity.

"This is a very strange feature, lying in a precise geometric fashion with six nearly equally straight sides," said Kevin Baines, atmospheric expert and member of Cassini's visual and infrared mapping spectrometer team at NASA's Jet Propulsion Laboratory, Pasadena, Calif. "We've never seen anything like this on any other planet. Indeed, Saturn's thick atmosphere, where circularly-shaped waves and convective cells dominate, is perhaps the last place you'd expect to see such a six-sided geometric figure, yet there it is."

The hexagon is nearly 15,000 miles (25,000 kilometers) across. Nearly four Earths could fit inside it. The thermal imagery shows the hexagon extends about 60 miles (100 kilometers) down into the clouds.

"It's amazing to see such striking differences on opposite ends of Saturn's poles," said Bob Brown, team leader of the Cassini visual and infrared mapping spectrometer at the University of Arizona. "At the south pole we have what appears to be a hurricane with a giant eye, and at the north pole of Saturn we have this geometric feature, which is completely different."

The hexagon appears to have remained fixed with Saturn's rotation rate and axis since first glimpsed by Voyager 26 years ago. The actual rotation rate of Saturn is still uncertain, which means nobody knows exactly how long the planet's day is.

"Once we understand its dynamical nature, this long-lived, deep-seated polar hexagon may give us a clue to the true rotation rate of the deep atmosphere and perhaps the interior," Baines said.