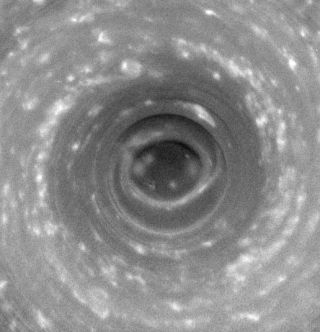 A freaky storm two-thirds the diameter of Earth and unlike anything ever seen has been spotted on Saturn.

The tempest, some 5,000 miles wide (8,000 kilometers), has an oddly human-looking hurricane-like eye [image]. But it is very different from a terrestrial hurricane, scientists said today.

NASA's Cassini spacecraft photographed the huge storm. It swirls with 350 mph winds at the ringed planet's south pole. It has a remarkably well-defined eye ringed by clouds that soar 20 to 45 miles high (30 to 75 kilometers), or up to five times taller than hurricane clouds on Earth.

"It looks like a hurricane, but it doesn't behave like a hurricane," said Andrew Ingersoll, a member of Cassini's imaging team at the California Institute of Technology. "Whatever it is, we're going to focus on the eye of this storm and find out why it's there."

The storm's eye is clear of clouds, as with a hurricane on Earth. And the eye-wall clouds are also similar to those that surround the eye of a storm here. Researchers don't know if rising, moist air is fueling the clouds, as in a normal hurricane. But the storm's eye, eye-wall and spiral arms are all "hurricane-like," they say.

Yet this storm rotates around Saturn's south pole-astronomers say the pole seems to be within the storm's eye and the system seems locked in place.

Other gas-planet storms, like the Red Spot on Jupiter and many smaller storms on both Saturn and Jupiter, do not have eyes.

This newfound storm's eye offers a window into Saturn.

"The clear skies over the eye appear to extend down to a level about twice as deep as the usual cloud level observed on Saturn," said Kevin Baines of Cassini's visual and infrared mapping spectrometer team at NASA's Jet Propulsion Laboratory. "This gives us the deepest view yet into Saturn over a wide range of wavelengths, and reveals a mysterious set of dark clouds at the bottom of the eye."

Previous observations have shown that Saturn's south pole is warmer than other parts of the planet by about 4 degrees Fahrenheit.

"The winds decrease with height, and the atmosphere is sinking, compressing and heating over the south pole," said Richard Achterberg, a member of Cassini's composite infrared spectrometer team at NASA's Goddard Spaceflight Center, Greenbelt, Md.

A short video of the storm is available here.