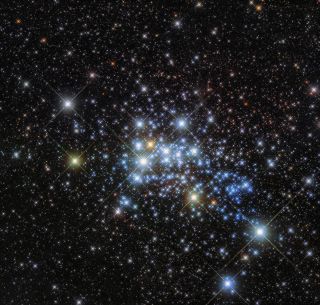 Westerlund 1, the glittering star cluster that is home to a truly massive hypergiant star, takes center stage in this photo by the Hubble Space Telescope.

Located about 15,000 light-years away, Westerlund 1 is the cosmic home of the giant star Westerlund 1-26, a monster red supergiant star (also known as a hypergiant). The star is so big, its radius is more than 1,500 times that of our sun, NASA officials said in an image description.

"If Westerlund 1-26 were placed where our sun is in our solar system, it would extend out beyond the orbit of Jupiter," NASA officials wrote.

At around 3 million years old, the Westerlund 1 cluster is a young collection of stars when compared to our own sun  which is roughly 4.6 billion years old. This super star cluster likely was birthed in a single flurry of events  making all the stars residing here roughly the same age and composition, NASA officials explained.