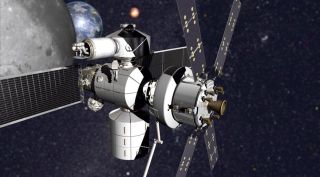 GREENBELT, Md. — Despite uncertainty about potential policy changes, NASA is pressing ahead with plans for a cislunar "gateway" outpost for future human missions, with decisions about how to develop it expected in the coming months.

Speaking at the American Astronautical Society's Goddard Memorial Symposium here March 8, Bill Gerstenmaier, NASA associate administrator for human exploration and operations, said he was studying concepts for launching the first elements of the proposed outpost as secondary payloads on early flights of the Space Launch System.

"There's starting to be a sense of urgency" about selecting what to fly on those initial SLS missions to support development of the cislunar outpost, he said. "We've really got to start making some decisions about what that cargo is." [Visions of Deep-Space Stations for Exploration]

The outpost will be a collection of habitation, cargo and other modules that could support crews working in lunar orbit or elsewhere in cislunar space for extended periods. Orion spacecraft would ferry astronauts to and from the outpost, where they could test technologies and perform other work needed to support NASA's long-term plans for human missions to Mars in the 2030s.

Gerstenmaier said development of the outpost could begin with the second and third SLS missions, EM-2 and -3, which will be the first flights of the SLS to use the more powerful Exploration Upper Stage (EUS). That version of the SLS will have the ability to carry secondary payloads weighing up to several thousand kilograms within the rocket's Universal Stage Adapter, an area between the EUS and Orion spacecraft.

Current schedules call for the launch of EM-2 as soon as 2021, which Gerstenmaier said pushes NASA to make decisions soon on what element of the outpost, if any, to fly on that launch. "We've really got to start making some decisions about what that cargo is, whom we partner with and how we build the equipment," he said. "You're going to see us, over the next several months, starting to make some pretty crisp decisions about what goes on those flights."

EM-1 and the moon

A wild card in those plans is the ongoing study of putting a crew on the first SLS/Orion mission, EM-1. That mission is currently scheduled to launch in late 2018 without a crew, but if NASA does decide to place astronauts on that mission, it would likely slip until 2019, pushing back EM-2 and later missions.

Gerstenmaier, in an interview after his conference presentation, said putting a crew on EM-1 could open up new possibilities for EM-2 and later missions. "It makes EM-2 be more of an aggressive mission, and we can do more with the cargo that's behind the Orion capsule on that flight," he said.

Gerstenmaier and others cautioned that no decision had been made about flying crew on EM-1, as the study was ongoing. "We realize the challenges associated with that. That's not an easy task to do," NASA Acting Administrator Robert Lightfoot said in remarks at the conference earlier the same day. "I expect to hear pretty soon in terms what we could do."

The idea of the study had its roots in the potential for other delays in EM-1. Chris Shank, who led the NASA "landing team" for the incoming Trump administration late last year, said on a conference panel that Gerstenmaier informed him at a meeting that the service module for that mission, being provided by the European Space Agency, could be delivered several months late.

"We asked, if given more time, if there are some additional things that you could do with the mission," Shank said. That led to consideration of flying crew on the mission. "As part of the transition, there were no preconceived conclusions. This is genuinely a study on how to get the best bang for the buck."

Whether or not NASA decides to fly a crew on EM-1, there's widespread speculation in the space community that the Trump administration might redirect NASA's human spaceflight efforts towards lunar missions, including a human return to the lunar surface. Industry officials, though, said that a cislunar gateway would still be useful for human missions to the surface of the moon.

"I would argue that none of it becomes obsolete. This was intended to be a first step, or an outpost" regardless of ultimate destination, said Matt Duggan, exploration manager at Boeing, during a March 9 conference panel.

Boeing is one of six companies that received contracts in August from NASA as part of its Next Space Technologies for Exploration Partnerships, or NextSTEP, program. The contracts call on the companies to develop designs for habitat modules that could be used on future cislunar habitats.

Some of the companies, like Boeing, have also developed more comprehensive cislunar outpost designs, which Duggan said takes into account their potential use supporting lunar landing missions, originally by international partners and not NASA. "We may be talking more now about a U.S. trip to the surface of moon," he said, "but an international trip to the surface of the moon has always been in the trade space."