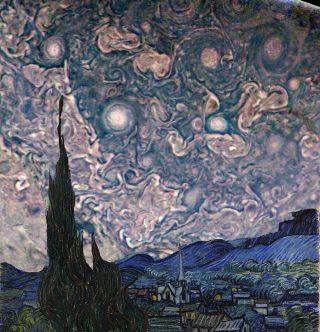 Jupiter's swirling cloud tops, photographed by NASA's Juno probe, look like something straight out of a dream, or even a famous painting.

The primary objective of NASA's Juno mission to Jupiter is to study the regions beneath the planet's cloudy "surface," and yet, the little space probe's JunoCam instrument continues to send back breathtaking images of the gas giant's swirling weather patterns.

The image used by Sparavigna was taken during the probe's most recent close flyby of the planet, on Feb. 2 (according to the image description). The Juno probe is currently looping around Jupiter in a flight pattern that brings it close to the planet every 53 days. The orbit protects the probe from the extreme radiation belt that wraps around the gas giant.

The raw images that JunoCam sends back to Earth usually don't look like much, but they contain information that can be extracted with imaging processing and color correcting. The resulting images can highlight particular features in the cloud tops, or re-create what the planet might look like to human eyes up close. Most of the work that has gone into processing the JunoCam images has been done by citizen scientists. The JunoCam team posts the raw image files online, and anyone can take them, process them and post the final result on the JunoCam website. Some users do extreme processing, creating amazing works of art, while others work on the images in such a way as to reveal new features and assist in the pursuit of knowledge about this planet.

Another image posted to the JunoCam website, using a raw image captured during the Feb. 2 flyby, shows tendrils of gases swirling in the Jovian atmosphere. After some computer processing of the images, the snapshot shows clouds that look like either cream swirling in coffee or tufts of cotton candy (or maybe that's just because of the pastel pink and blue colors).