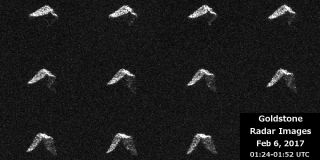 This composite of 11 images of asteroid 2017 BQ6 was generated with radar data collected using NASA’s Goldstone Solar System Radar in California's Mojave Desert on Feb. 5, 2017, about 5 hours before the asteroid's closest approach to Earth.
(Image: © NASA/JPL-Caltech/GSSR)

Fancy a little role-playing in space? An asteroid that whizzed by Earth on Feb. 7 looks very much like a die used in the complex role-playing game Dungeons & Dragons.

The fantasy tabletop game, first published in 1974, requires players to use several polyhedral (many-sided) dice. Asteroids come in all shapes and sizes, but asteroid 2017 BQ6 is somewhat unique with its multiple, relatively flat sides separated by distinct creases, similar to a multisided die.

"The radar images show relatively sharp corners, flat regions, concavities, and small bright spots that may be boulders," said Lance Benner of NASA's Jet Propulsion Laboratory, who leads the agency's asteroid radar research program, in a statement from the agency. He added that the asteroid, to him, looks like a D&D die.

The shape was revealed after the Goldstone Deep Space Communications Complex in California took radar images of the asteroid. The space rock is about 660 feet (220 meters) across and rotates once every 3 hours. The images show features as small as 12 feet (3.75 m) across.

The asteroid came close to Earth by celestial standards: it flew by about 6.6 times the distance between the Earth and the moon. The NASA-funded Lincoln Near Earth Asteroid Research (LINEAR) Project found the small world on Jan. 26. Asteroid 2017 BQ6 made its closest approach to Earth at 1:36 a.m. EST (0636 GMT) on Feb. 7, at a distance of 1.6 million miles (2.5 million kilometers.)

"Radar has been used to observe hundreds of asteroids," NASA said in the same statement. "When these small, natural remnants of the formation of the solar system pass relatively close to Earth, deep space radar is a powerful technique for studying their sizes, shapes, rotation, surface features, and roughness, and for more precise determination of their orbital path."