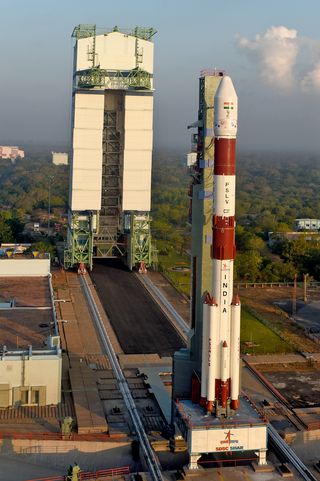 An Indian rocket will shatter a satellite-launching record tonight (Feb. 14) if everything goes according to plan.

A Polar Satellite Launch Vehicle (PSLV) is scheduled to lift off from India's Satish Dhawan Space Center at 10:58 p.m. EST tonight (0358 GMT on Feb. 15) with a whopping 104 satellites on board. The current record for most spacecraft lofted in a single launch is 37, set by a Russian Dnepr rocket in June 2014.

The primary payload atop the PSLV is India's Cartosat-2 Earth-observation satellite. The other 103 spacecraft are nanosatellites provided by organizations from a number of countries: India, Israel, Kazakhstan, the Netherlands, Switzerland, the United Arab Emirates and the United States. [Photos: Tiny Satellites in Space]

The vast majority of the tiny spacecraft are from the U.S.; indeed, San Francisco-based company Planet (formerly known as Planet Labs) owns 88 of them. Each of these Earth-observing satellites, known as Doves, is just 12 inches long by 4 inches wide by 4 inches high (30 by 10 by 10 centimeters) and weighs about 10 lbs. (4.5 kilograms). Despite their small size, Doves have very sharp vision: From low-Earth orbit, they can resolve surface features just 10 feet (3 meters) across, Planet representatives have said.

Tonight's launch aims to place the 104 spacecraft into polar sun-synchronous orbit with an altitude of 314 miles (505 kilometers), ISRO officials said.