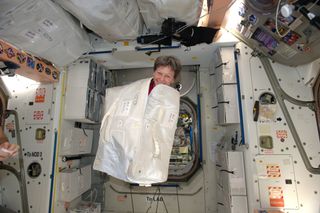 NASA astronaut Peggy Whitson pops out of a cargo bag during a prank on the International Space Station on Feb. 13, 2017.
(Image: © Peggy Whitson/Twitter/NASA)

NASA astronaut Peggy Whitson just pulled off a prank that's literally out of this world.

Whitson, a veteran space traveler, is one of six people living and working on the International Space Station right now. And while astronauts are usually pretty busy in space, Whitson found time Monday (Feb. 13) to surprise her Russian crewmates with a gag you could only pull off in space. As you can see here, Whitson packed herself inside a cargo bag and enlisted two partners-in-prank (NASA's Shane Kimbrough and France's Thomas Pesquet) to surprise their Russian crewmates. [Fun in Zero G: Awesome Weightless Photos]

The Russian members of the station's current Expedition 50 crew are Andrewy Borisenko, Sergey Ryzhikov and Oleg Novitskiy. I can only guess at what they thought when a seemingly innocent cargo bag floated into their module, only to have Whitson pop out.

Pesquet, a European Space Agency astronaut, apparently tried to climb in a cargo bag, too. But that didn't work out.

This isn't the first time Whitson and her crewmates have had fun in space during their mission. To celebrate the Super Bowl earlier this month, they practiced some weightless tosses of their own ... using Whitson as the ball.

And there was that time last month when Whitson decided to play with her space jello.

Whitson, Pesquet and Novitsky launched to the space station last November, joining Kimbrough (who commands Expedition 50 mission), Borisenko and Ryzhikov already onboard. Later this month, Kimbrough, Borisenko and Ryzhikov will return to Earth. At that time, Whitson will take command of the space station for the second time in her career — a first for a female astronaut.