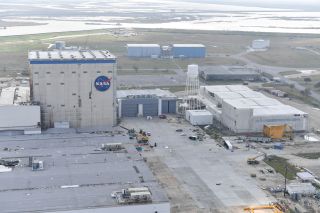 An aerial view of tornado damage at NASA's Michoud Assembly Facility taken one day after a tornado struck the center in New Orleans center on Feb. 7, 2017.
(Image: © Steven Seipel/NASA/MAF)

NASA has reopened its Michoud Assembly Facility in New Orleans as recovery work continues in the wake of a powerful tornado that damaged the manufacturing center last week.

"Significant progress has been made on tornado recovery, and NASA's Michoud Assembly Facility reopened on Monday Feb. 13 for normal operations with a few exceptions," NASA officials wrote in a status update today (Feb. 13). [In Photos: Tornado Damage at NASA's Michoud]

A tornado hit the Michoud facility on Tuesday (Feb. 7). Five of the Michoud center's 3,500 employees sustained minor injuries, NASA officials have said. Recovery work began last Wednesday and continued through the weekend, during which time the center was closed to employees.

"Michoud Safety and Security completed an initial damage assessment of the 81 buildings and structures at the 829-acre facility," NASA officials wrote in the status update. "Power and utilities are restored to most of the site, and the team has made steady progress clearing debris, repairing buildings, and helping employees remove damaged cars."

Of those 81 Michoud buildings, seven are off-limits to allow damage assesments of them to be completed, NASA officials added. Three of those structures suffered significant damage, they added.

The Michoud Assembly Building is the manufacturing center for some of the largest pieces of NASA hardware. Stages of NASA's mightly Saturn V moon rocket were built at the site, as were the giant external tanks used by the agency's space shuttles. Today, major elements of NASA's next megarocket, the Space Launch System, are being built at the site. The rocket will launch NASA's Orion crew capsule.

"Teams for NASA's Space Launch System (SLS) heavy-lift rocket and the Orion spacecraft are back on-site with some restarting regular work and others assessing the status of tooling and hardware in areas of buildings that experienced tornado damage," NASA officials wrote. "Both SLS and Orion structures are being built in Building 103, which experienced some damage, but power has been restored to most of that building."

NASA is urging Michoud employees to check with their employees for instructions before returning to work. More status updates will be posted as warranted here: https://www.nasa.gov/michoud.