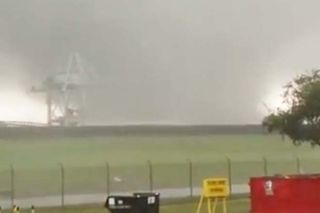 A tornado impacted NASA's Michoud Assembly Facility in New Orleans, Louisiana on Feb. 7, 2017. This image, from a still from a NASA video, shows the tornado near a crane structure.
(Image: © NASA/YouTube)

Editor's Note: NASA has begun the recovery efforts after this tornado. You can read the full story here.

A tornado impacted NASA's Michoud Assembly Facility in New Orleans Tuesday (Feb. 7), according to a statement released by the agency.

"At this time, only minor injuries have been reported and NASA employees and other tenants are being accounted for," NASA officials said in the statement. The tornado hit the facility at 11:25 a.m. CST (12:25 p.m. EST/1725 GMT), they added. [In Photos: Tornado Damage at NASA's Michoud Assembly Facility]

"That thing is an awesome thing to look at," one spectator said in the video, referring to the massive grey funnel on the horizon.

"Hopefully, everybody's okay, but it is real bad," said a person taking footage of the facility after the tornado had passed. The video seemed to show damage to buildings and a car flipped over in a parking lot.

"There is still a threat of severe weather in the area and emergency officials are continuing to monitor the situation to ensure the safety of onsite personnel," the statement said. "The onsite Michoud emergency response team is also conducting damage assessments of buildings and facilities."

Currently, the Michoud Assembly Facilityis responsible for manufacturing and assembling the core stage of NASA's next-generation heavy-lift rocket, the Space Launch System (SLS), which is built by Boeing, according to NASA's website. Michoud will also assemble and integrate the SLS main propulsion system, including the RS-25 engines, built by Aerojet Rocketdyne. The facility is also involved in manufacturing large structures and composites for the Orion crew vehicle. Previously, NASA used the facility to assemble the external propulsion tanks for the space shuttle program, as well as Saturn V moon rocket stages.

News outlets are reporting that perhaps as many as seven tornadoes have struck Louisiana today. Louisiana Gov. John Bel Edwards has declared a state of emergency.