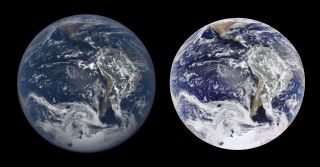 NASA has overhauled its archive of amazing Earth views from space. The space agency's Earth Polychromatic Imaging Camera (EPIC) website will now provide daily, up-close views of the planet in both natural and enhanced color.

EPIC lives aboard the Deep Space Climate Observatory (DSCOVR) satellite, which orbits the sun about 1 million miles from Earth and studies the weather and climate systems of our planet. The camera captures a new image approximately every hour from mid-April to mid-October, as well as every 2 hours during the rest of the year, NASA officials said in a statement.

You can view the latest Earth image of the day, archived photos of Earth and animations of events like moon transits on the EPIC home page here.

In addition to offering an enhanced view of the planet, the public can also zoom in on specific areas on the globe, scroll through the latest views of Earth as it rotates and download spectacular photos of the planet's beautiful landscapes and blue oceans.

Another new feature is an image information box, which includes EPIC's distance to Earth and the sun, the sun-Earth-vehicle angle and details about which side of Earth is featured in the current EPIC image, NASA officials said in the statement.

DSCOVR launched on Feb. 11, 2015, aboard a SpaceX Falcon 9 rocket and is a joint mission led by NASA, the National Oceanic and Atmospheric Administration (NOAA) and the U.S. Air Force.