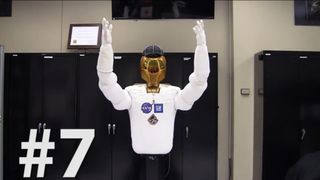 Sporting a referee's hat and whistle, NASA's humanoid Robonaut 2 (R2) showed off some Super Bowl referee signals in a new video. The robot, which is being tested on the International Space Station, used its hands and body to simulate the calls a football referee would make.

The video offers viewers the chance to try to guess about 10 referee calls that the robot is simulating. Some of them include a touchdown (hands raised in the air) and a flag penalty (where the robot raises its right hand and drops a small, orange flag on the ground).

A version of R2 launched to the International Space Station in 2011, where it is being tested for routine tasks such as flipping switches or cleaning filters. The long-term aim is to create a human "helper" to free up astronauts for more time-intensive work, such as science experiments. [NASA Goes to Super Bowl 2017 (Photos)]

R2 may eventually be upgraded to allow it to work outside the space station. This would allow the robot to take on tasks during spacewalks, which are considered some of the most dangerous activities for astronauts.