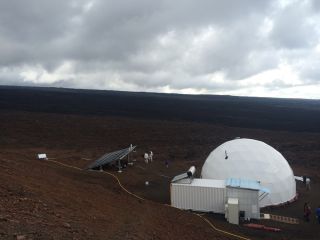 On Jan. 19, "astronauts" once again started populating the isolated HI-SEAS Habitat in Hawaii, where they are simulating aspects of a human mission to Mars for eight months.
(Image: © Calla Cofield/Space.com)

Another long-term space simulation is underway at the Mauna Loa volcano in Hawaii, where six crewmembers entered a small, isolated dome Jan. 19 as a part of the HI-SEAS mission.

This is the fifth iteration of HI-SEAS, also known as the Hawai'i Space Exploration Analog and Simulation. NASA is funding this mission and a sixth mission, scheduled for 2018, for $1 million.

For the next eight months, crewmembers will simulate a mission on a planetary surface similar to Mars'. The simulation will include a 20-minute delay in communication, because it takes time to send messages at light speed from Earth to Mars, and they will have limited contact with the outside world — in previous missions, water was delivered every six weeks and supply "missions" every few months.

The crew will also be expected to follow many protocols simulating life in space. Their routines will include eating food from shelf-stable ingredients, performing scientific research, doing daily exercise, maintaining equipment and tracking use of food, power and water. They'll have to put on spacesuits to leave the dome.

HI-SEAS' fourth iteration finished a one-year mission last year, putting the program in a small group of space analogs that have kept crews in isolation for that long. Other examples include the European Space Agency's Mars500 mission and the Concordia Research Station in Antarctica.