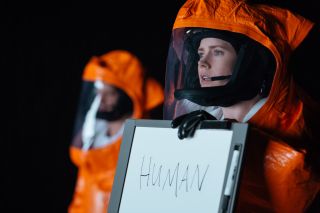 2016's "Arrival" depicted first contact with aliens and the struggle to understand and communicate with them.
(Image: © Jan Thijs/Paramount Pictures)

This year's Academy Awards may have an otherworldly bent: The sci-fi spectacle "Arrival" and the space history flick "Hidden Figures" were nominated for Best Picture, and space media made the list in other places as well.

"Arrival" is a thoughtful story of alien contact based on a short story by Ted Chiang that was released in November of last year. In addition to receiving the nomination for Best Picture, the  film was nominated for Best Directing, Best Adapted Screenplay, Best Cinematography, Best Film Editing and Best Sound Mixing.

"Hidden Figures," a film that follows black women who performed calculations at NASA's Langley Research Center in Virginia leading up to John Glenn's orbit around the Earth, was also nominated for Best Picture. In addition, Octavia Spencer was nominated for Best Actress in a Supporting Role for portraying pioneering programmer Dorothy Vaughan. The film also scored a nomination for Best Adapted Screenplay; it was based on a new historical narrative by Margot Shetterly. The movie debuted in a limited number of theaters on Dec. 25, 2016, and was released more widely on Jan. 6, 2017. [On 'Hidden Figures' Set, NASA's Early Years Take Center Stage]