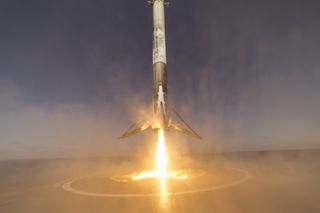 This SpaceX photograph captures the company's Falcon 9 rocket just before it landed successfully on the drone ship "Just Read The Instructions" in the Pacific Ocean on Jan. 14, 2017. SpaceX has been landing rockets in the pursuit of a fully reusable rocket system to lower the cost of spaceflight.
(Image: © SpaceX)

SpaceX Back in Action for 2017

On Jan. 14, the private spaceflight company SpaceX launched a Falcon 9 rocket carrying 10 commercial communications satellites in a flawless liftoff from California's Vandenberg Air Force Base. The mission was SpaceX's first flight since a Sept. 1 explosion destroyed a Falcon 9 rocket and its Amos-6 satellite payload during a test at the company's launchpad at Florida's Cape Canaveral Florida.

If you missed the launch, you can watch video of the Falcon 9 rocket soaring into space here, and click the arrows to relive the flight in photos by SpaceX (and later Space.com's own Calla Cofield, who witnessed the launch first-hand).

SpaceX (and its customer, satellite communications operator Iridium) had a lot riding on the Jan. 14 launch. For SpaceX, it was a return to flight after more than four months of down time to track the cause of the Sept. 1, 2016 explosion. The company ultimately traced the cause to the aluminum of a helium tank inside the upper stage of the two-stage Falcon 9 booster and devised measures to avoid the problem moving forward.

But for Iridium, the stakes were high for a different reason.

NEXT: Building a Constellation

For Iridium, more than just tech was riding on the Falcon 9. The rocket was carrying Iridium-1, the first wave of the company's vast new Iridium NEXT mobile communications satellite constellation, a network that - when complete - will consist of 70 satellites providing vast coverage for Iridium's customers.

Iridium built the Iridium NEXT satellites to launch 10 at a time, so if something went wrong with the Falcon 9's return to flight, Iridium could have lost one-seventh of its planned constellation.

Here's an illustration of what an Iridium NEXT satellite will look like when fully operational in orbit. Each of the satellites weighs 1,896-lbs. (860 kilograms).

At the time of truth, everything functioned perfectly. The Falcon 9 rocket lifted off from Space Launch Complex 4E at Vandenberg Air Force Base in California at 9:54:39 am PST to begin its swift journey into space.

NEXT: From Whence It Came

From Whence It Came

SpaceX's Falcon 9 rockets are covered with cameras to offer views of the booster during critical phases of flight. This view, facing down, offers a one last parting glance at the Falcon 9's launch site as the rocket ascends towards orbit.

That Falcon 9 is Gone, Baby, Gone

When SpaceX launched the Falcon 9 on Jan. 14, Space.com's Calla Cofield was there to watch the return to flight with her own eyes. She captured this photo as the rocket soared into a clear, blue California sky.

After the launch, all Calla could see was a wispy contrail from the Falcon 9's exhaust in a stunningly blue sky.

SpaceX's Falcon 9 rockets are two-stage boosters. About 2 1/2 minutes after launch, the first and second stages separate, and the second stage engine ignited to carry the 10 Iridium satellites to their destination in low-Earth orbit.

Here, the second stage engine glows a dull red as it powers its 10-satellite payload ever higher into orbit. Where's the Falcon 9 first stage? Well, it has its own mission ...

NEXT: Heading Back to Earth

Heading Back to Earth

SpaceX builds its Falcon 9 rockets to be partially reusable. To that end, the first stage of Falcon 9s are equipped with four grid-like fins at their top and enough fuel to return to Earth. SpaceX ultimately plans to reuse Falcon 9 boosters to reduce the cost of spaceflight. Here, you can see two of the grid fins, which help stabilize the booster during its descent back to Earth, along with a spectacular view of the planet below as the rocket returns home.

NEXT: Almost There (Stay on Target)

Almost There (Stay on Target)

The Falcon 9 booster had a specific target for its landing on Jan. 14: the drone ship "Just Read The Instructions" which was holding position just off the coast of California, within range of the Falcon 9.

Here, you can see the view from a camera on the Falcon 9 as it nears its target. The rocket booster's four landing legs are deployed and it's right on target (there is a giant "X" on the drone ship below that the Falcon 9 was aiming for).

In a first for SpaceX, the descent camera on the Falcon 9 beamed live video of the entire trip back to Earth - a flawless picture for a flawless landing.

NEXT: A Fiery Return