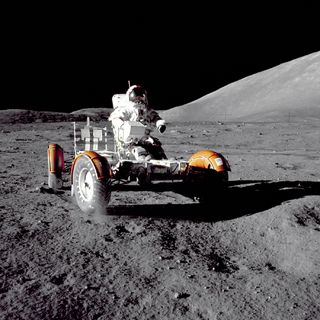 Gene Cernan with the Apollo 17 rover on the moon in December 1972.
(Image: © Harrison H. Schmitt/NASA)

The late Gene Cernan had a lot to be nostalgic about, but his thoughts were by no means trapped in the past.

Cernan commanded NASA's Apollo 17 mission in December 1972, and he's the last person ever to leave footprints on the surface of the moon. The former astronaut, who died Monday (Jan. 16) at the age of 82, mused repeatedly about what his mission, and the Apollo program in general, would mean to future generations.

"Just standing here, a little nostalgic, sort of gives me a chance to wonder whether this all happened in my life — whether it was reality or whether it was a dream," Cernan said in the 2014 documentary "Last Man on the Moon," as he gazed at the Apollo 17 command module at NASA's Johnson Space Center in Houston. [Cernan Visits Apollo 17 Capsule: "The Last Man on the Moon" Video Clip]

"I also stand here, and I'm wondering what people are going to think, not in another 40 years, but maybe another 100 years — who knows, maybe another 1,000 years," he added.

"I've said for a long time, [and] I still believe it, it's going to be — well it's almost 50 now — but 50 or 100 years in the history of mankind before we look back and really understand the meaning of Apollo," he said back then.

"We did it way too early considering what we're doing now in space," Cernan added. "It's almost as if JFK [President John F. Kennedy] reached out into the 21st century where we are today, grabbed hold of a decade of time, slipped it neatly into the '60s and '70s, and called it Apollo," he said.

More famous are the words Cernan uttered on the moon more than four decades ago. For example, he and Apollo 17 crewmate Harrison Schmitt sang a variant of Ed Haley's "The Fountain in the Park" as they bounded across the lunar surface: "I was strolling on the moon one day/In the merry, merry month of December."

And Cernan said the following just before climbing into the ascent stage of the Apollo 17 lunar module on Dec. 14, 1972, to begin the journey back to Earth:

"As I take man's last step from the surface back home for some time to come — but we believe not too long into the future — I'd like to just [say] what I believe history will record: that America's challenge of today has forged man's destiny of tomorrow. And, as we leave the moon at [the valley] Taurus-Littrow, we leave as we came and, God willing, as we shall return, with peace and hope for all mankind. Godspeed, the crew of Apollo 17."

Cernan, Schmitt and their crewmate Ron Evans returned to Earth on Dec. 19, 1972, splashing down in the Pacific Ocean. It's unclear when Cernan will lose his "last person on the moon" title; there are no concrete plans at the moment to send humans back to Earth's nearest neighbor.