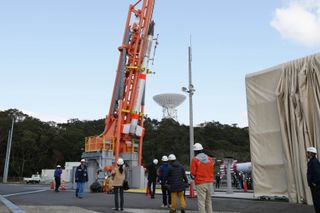 The three-stage rocket, called SS-520-4, was the size of a telephone pole and launched from Japan's Uchinoura Space Center at 8:33 a.m. Japan Time (6:33 p.m. EST or 2333 GMT on Saturday, Jan. 14), but a communications failure forced JAXA flight controllers to abort the ignition of the rocket's second stage, according to a translated JAXA mission update. The rocket and its tiny payload, a microsatellite called TRICOM-1, ultimately fell in to the sea southeast of the Uchinoura center in Japan's Kagoshima Prefecture.

According to JAXA, the first stage of the SS-520-4 rocket performed as planned, but then flight controllers were unable to receive a signal from the booster. That apparently prompted the abort decision. [Small Rocket Launches in Pictures]

The data dropout occurred about 20 seconds into the launch and the abort occurred three minutes after liftoff, according to a Japan Times report. Sunday's launch was delayed repeatedly from its original date of Tuesday, Jan. 10, due to weather conditions.

The 31-foot-tall (9.5 meters) SS-520-4 rocket design expanded upon a two-stage sounding rocket that was capable of lifting experiments to space for a few minutes; the addition of a third stage lets the craft reach high enough speeds to place objects into orbit, according to Spaceflight Now.

The rocket weighs 2.9 tons (2.6 metric tons), is 1.7 feet (0.52 m) in diameter and operates using solid fuel, according to a JAXA description. The cubesat, TRICOM-1, weighs in at approximately 6.6 lbs. (3 kilograms), and measures just 4.7 inches (12 centimeters) in length and width and 13.8 inches (35 cm) in height. TRICOM-1 was designed by students to photograph the Earth and run communications experiments.

While small satellites like TRICOM-1 are frequently launched into space, they are rarely launched alone; usually, many are deployed at oncefrom a rocket hefting larger satellites or cargo. The recent launch demonstrates the potential for using a low-cost, dedicated craft for tiny satellites that relies on commercial technology, Spaceflight Now said. The project's budget was $3.5 million, and it was a one-of-a-kind demonstration toward building future "nano launcher" rockets.

The U.S. company Rocket Lab and others are also working on small, low-cost launch vehicles for tiny satellites, but those would be able to carry much larger payloads(and are correspondingly larger).