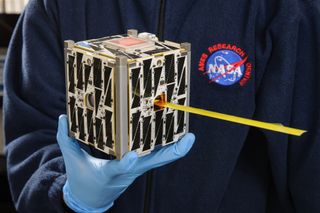 NASA aims to get many more tiny cubesats to space in the coming years.

The space agency just opened the latest round of its Cubesat Launch Initiative, which provides rocket rides for tiny spacecraft developed by researchers at NASA, academic institutions and nonprofit organizations.

Applicants must submit their proposals by Nov. 24, and NASA officials expect to choose the winning cubesats by Feb. 19, 2016.

"Selected experiments will fly as auxiliary payloads on agency rocket launches or be deployed from the International Space Station beginning in 2016 and running through 2019," NASA officials wrote in a statement. "To date, NASA has selected 105 cubesats from 30 states. Thirty-seven cubesats have been launched, and 16 more are scheduled to go into space in the next 12 months."

NASA plans to launch at least one cubesat developed by a group based in every one of the 50 states (as well as Washington, D.C., and Puerto Rico). The current round of the Cubesat Launch Initiative focuses on getting representation from the 20 states — such as Arkansas, Mississippi and Wyoming — that have not yet fielded a successful proposal, agency officials said.

The basic building blocks of cubesats are "units" (U) that measure 4 inches (10 centimeters) on a side. A 3U cubesat is the size of three of those units put together; a 4U version is equivalent to four units, and so on.

Cubesats have been operating in Earth orbit for some time now. For example, San Francisco-based startup Planet Labs operates dozens of 3U cubesats called "Doves" that capture sharp imagery of our planet for a variety of customers.

And tiny spacecraft will soon head much farther afield. For example, NASA aims to launch two 6U cubesats toward Mars next year, to help relay communications during the entry, descent and landing operations of the agency's Mars Insight lander.

Furthermore, NASA is set to launch cubesats that hunt for water ice on the moon, study a near-Earth asteroid up close and measure how deep-space radiation affects DNA. These will travel on the first flight of NASA's Space Launch System megarocket, which is scheduled for 2018.