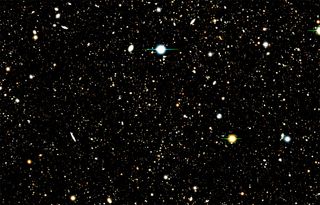 This image shows the results of a deep field survey by the Subaru Telescope. A new analysis used a Subaru deep field image to identify the location of nearly 1,300 distant galaxies. The analysis then combined the UV radiation from those galaxies to learn about their composition. A few bright supernovas can also be seen in the image.
(Image: © Subaru Telescope, NAOJ)

GRAPEVINE, Texas — The galaxies are greener on the other side of the universe, it seems: A new analysis reveals that some of the most distant galaxies ever observed are radiating green light, a finding that could deeply affect developing models of those early galaxies.

"It’s a very distinctive, intense green light that these galaxies are just pouring out," Matt Malkin, a professor of physics at the University of California, Los Angeles, who led the new research, said on Dec. 8 during a news conference at the 229th American Astronomical Society meeting.

Researchers have seen this same kind of green light coming from a few galaxies in the nearby universe, but, according to Malkin, the "shocking" part of the new analysis is in the number of galaxies involved: The green light that researchers observed in the new study appears to be coming from most or all of the galaxies that formed in the first 1 billion or 2 billion years of the universe. The finding is further evidence that scientists don't fully understand many of the characteristics of stars and galaxies that existed in this early period of the universe's lifetime. Thankfully, that's an era that a few upcoming telescopes are going to illuminate. [The History & Structure of the Universe (Infographic)]

Green is a not a typical color for a galaxy. Most galaxies that scientists observe tend to be whitish in color, with a few subtle deviations — some may have a red, orange or yellow hue if they contain a lot of cool, red stars; others appear bluish-white if they contain a lot of hot, short-lived blue stars. Regions with a lot of hot gas can have strong, distinct colors, as well. For example, regions of recent heavy star formation, like the Orion Nebula, may radiate a pinkish glow created by the presence of hydrogen. (Thanks to a technique called spectroscopy, scientists can look at the light from an object and figure out what chemicals are present.)

But there are a few exceptions in the relatively nearby universe: a sprinkling of dwarf galaxies with high rates of star formation known as "green pea galaxies" that were identified through the citizen scientist project Galaxy Zoo. The greenish tint comes specifically from oxygen atoms that have had two of their electrons ripped away (the symbol for this type of oxygen atom is O++).

For a star to produce enough energy to doubly ionize oxygen atoms, it would have to have a temperature of around 50,000 Kelvin, according to Malkin; the hottest known stars in the universe reach temperatures of 50,000 or 60,000 Kelvin. It could be that these green peas have an unusually high number of very hot stars that send their energy through oxygen-rich gas clouds and deliver a solid wallop to the oxygen atoms therein, removing two electrons from the atoms. But a full explanation for how green-pea galaxies produce such a large amount of these specific types of oxygen atoms is still a matter of debate, according to a statement from UCLA about the new work.

Green peas make up less than one hundredth of 1 percent of known galaxies. The galaxies that Malkin and colleagues studied are all very, very far away, and because light takes time to travel through space, that means that astronomers are seeing those galaxies the way they were a long, long time ago. The light from the galaxies that Malkin and his team are studying was emitted about 11 billion years ago, when the universe was only about 2 billion or 3 billion years old.

Those early galaxies were a little less chemically cluttered than modern ones. The furnace at the heart of a star fuses atoms together, creating stuff like carbon, iron and oxygen. When massive stars die, they explode and spread those elements out into space, and those explosions can also compress and heat material to create more heavy elements. After more than 10 billion years of star formation and star death, modern galaxies are a rich stew of heavy elements (astronomers characterize these stars as having "high metallicity") — a condition that wasn't present in those young galaxies.

When those heavy elements are inside a star, they tend to absorb the energy coming from the star's internal furnace, so stars in the modern universe (where there are more heavy elements) tend to be cooler than stars in the early universe. In other words, lower metallicity stars tend to be hotter and release more high energy radiation, Daniel Stark, an assistant professor of astrophysics at the University of Arizona who was not involved in the new analysis, told Space.com. Modern galaxies may certainly display a little bit of the green light indicative of O++ atoms, according to Malkin, but that light doesn't dominate the color of the galaxy.

If early galaxies didn't contain quite so many heavy elements, then there should be more of those very hot stars. That energy could pass through oxygen-rich interstellar gas clouds, and potentially create a stronger O++ green glow. Models of those early, massive stars indicate that this is likely the case, but the new finding shows that the green light is a factor of two more intense than what the models predict. Malkin said the models "depend on a lot of unknown parameters" and are currently fairly simplistic, but he estimates that the light from the O++ atoms is "four or more times stronger" than the pink light from gaseous hydrogen; most models predict that the signature of hydrogen should be equal or stronger than O++. (A study released earlier this year confirmed the presence of oxygen in one equally distant galaxy).

"We can study the massive stellar populations in the Milky Way in great detail. But stars that are present in the early universe are likely to have much lower metal content," Stark said. "The massive stars in such low metallicity systems remain very poorly understood."

It's possible that the stars are actually "somehow much hotter, more energetic than even the hottest energetic stars we're familiar with today," Malkin said during his presentation at AAS. "So they're not just emitting UV photons, they're emitting extreme, high-energy UV photons. They're practically X-rays, coming out of these stars."

For comparison, the surface temperature of the sun is around 5,000 or 6,000 Kelvin and thus the central body of our nearest star is not hot enough to produce X-rays or knock two electrons off an oxygen atom. (The surrounding corona reaches temperatures of up to a million Kelvin, and can produce X-rays.)

One of the reasons models of ancient galaxies aren't very robust is because those galaxies are incredibly far away, and thus they're incredibly difficult to study; there's simply not a lot of observational data to go on. Malkin and his colleagues could not see the green glow from the individual galaxies they studied; by themselves, the galaxies are too faint. But by combining the observations from the Subaru Deep Field of 1,294 galaxies (a technique called "stacking"), Malkin and his colleagues were able to see the general characteristics of these galaxies. They were shocked when they saw that the green light they observed was so much stronger than what their models anticipated; in fact, it's the strongest emission line emitted by these galaxies, which means that even though hydrogen should be the most common element in these galaxies, the light they're emitting is dominated by this doubly ionized oxygen.

According to Malkin, the signal is so strong that it can't easily be explained by a few outliers; it appears that most of the young galaxies that existed at that particular point in the universe's evolution were emitting this green light.

A new generation of telescopes will be needed to answer major questions about these stars and galaxies, both Malkin and Stark said. Right now, scientists can't see the very high-energy UV light that these galaxies might be emitting. But the James Webb Space Telescope will be sensitive to the green light that Malkin and his colleagues detected; the instrument will also very quickly provide a resolution that's high enough to study those distant galaxies individually.

If that strong O++ green glow is truly characteristic of most galaxies from that time, then scientists could use that doubly ionized oxygen signal to help date the age of distant galaxies, and confirm the detection of new galaxies from that period in the universe's history.

The results of the new analysis by Malkin and his colleagues are currently undergoing review for publication.