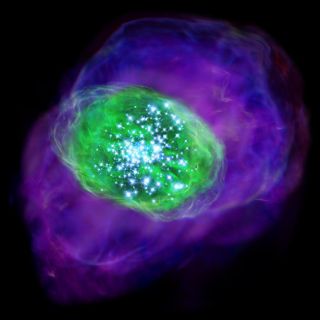 An artist's concept of the ancient galaxy SXDF-NB1006-2, which is 13.1 billion light-years from Earth and likely formed just after the universe's "dark ages." The universe is about 13.8 billion years old. The green color indicates oxygen in the galaxy as seen by the ALMA radio telescope, while purple denotes hydrogen detected by the Subaru telescope.
(Image: © NAOJ)

Astronomers have discovered signs of oxygen in one of the universe's first galaxies, which was born shortly after the cosmic "Dark Ages" that existed before the universe had stars, a new study finds.

The discovery — which centers on the truly ancient galaxy SXDF-NB1006-2, located about 13.1 billion light-years from Earth — could help solve the mystery of how much the first stars helped to clear the murky fog that once filled the universe, the researchers said.

Previous research suggested that, after the universe was born in the Big Bang about 13.8 billion years ago, the universe was so hot that all of the atoms that existed were split into positively charged nuclei and negatively charged electrons. This soup of electrically charged ions scattered light, preventing it from traveling freely. [Slideshow: From the Big Bang to Now in 10 Easy Steps]

"Dark Ages" of the universe

Prior work suggested that, about 380,000 years after the Big Bang, the universe cooled down enough for these particles to recombine into atoms, finally allowing the first light in the cosmos — that from the Big Bang — to shine. However, after this era of recombination came the cosmic "Dark Ages"; during this epoch, there was no other light, as stars had not formed yet.

Previous research also suggested that, starting about 150 million years after the Big Bang, the universe began to emerge from the cosmic Dark Ages during a time known as reionization. During this epoch, which lasted more than a half billion years, clumps of gas collapsed enough to form the first stars and galaxies, whose intense ultraviolet light ionized and destroyed most of the neutrally charged hydrogen, splitting it to form protons and electrons.

Details about the epoch of reionization are extremely difficult to glean because they happened so long ago. To see light from such ancient times, researchers look for objects that are as far away as possible — the more distant they are, the more time their light took to get to Earth. Such distant objects are only viewable with the best telescopes available today.

Much remains unknown about the epoch of reionization, such as what the first stars were like, how the earliest galaxies formed and what sources of light caused reionization. Some prior work suggested that massive stars were mostly responsible for reionization, but other research hinted that black holes were a significant and potentially dominant culprit behind this event.

Now, by looking at an ancient galaxy, researchers may have discovered clues as to the cause of reionization.

"The galaxy we observed may be a strong light source for reionization," study lead author Akio Inoue, an astronomer at Osaka Sangyo University in Japan, told Space.com.

Hunting for ancient galaxies with oxygen

Scientists analyzed a galaxy called SXDF-NB1006-2, located about 13.1 billion light-years from Earth. When this galaxy was discovered in 2012, it was the most distant galaxy known at that time.

Using data from the Atacama Large Millimeter/submillimeter Array (ALMA) in the Atacama Desert in Chile, the researchers saw what SXDF-NB1006-2 looked like 700 million years after the Big Bang. They focused on light from oxygen and from dust particles.

"Seeking heavy elements in the early universe is an essential approach to explore the star formation activity in that period," Inoue said in a statement.

The scientists spotted clear signs of oxygen from SXDF-NB1006-2, the most distant oxygen detected yet. This oxygen was ionized, suggesting that this galaxy possessed a number of young, giant stars several dozen times heavier than the sun. These young stars would have also emitted intense ultraviolet light, the researchers suggested.

The scientists estimated that oxygen was 10 times less abundant in SXDF-NB1006-2 than it was in the sun. This estimate matched the research team's simulations — only light elements such as hydrogen, helium and lithium existed when the universe was first born, while heavier elements, such as oxygen, were later forged in the hearts of stars.

However, unexpectedly, the researchers found that SXDF-NB1006-2 has two to three times less dust than simulations had predicted. This dearth of dust may have aided reionization by allowing light from that galaxy to ionize the vast amount of gas outside that galaxy, the researchers said.

"SXDF-NB1006-2 would be a prototype of the light sources responsible for the cosmic reionization," Inoue said in a statement.

One possible explanation for the smaller amount of dust is that shock waves from supernova explosions may have destroyed it, the researchers said. Another possibility is that there may not have been much in the way of cold, dense clouds in the space between SXDF-NB1006-2's stars, which grow in these clouds a bit like how snowflakes do in cold clouds on Earth.

The researchers are continuing to analyze SXDF-NB1006-2 with ALMA.

"Higher-resolution observations will allow us to see the distribution and motion of ionized oxygen in the galaxy and provide precious information to understand the properties of the galaxy," study co-author Yoichi Tamura, of the University of Tokyo, said in a statement.

The scientists detailed their findings online June 16 in the journal Science.