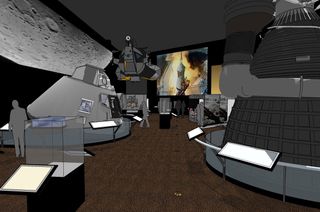 A new museum exhibit will feature space exploration artifacts retrieved from both the surface of the moon and the ocean floor when it opens in Seattle.

The Museum of Flight announced on Wednesday (Jan. 4) that its new space race exhibit will debut to the public on May 20, with moon rocks and once-sunken rocket engines on display.

"This exhibit is really going to focus on the space race, up through the post-Apollo 1970s," said Geoff Nunn, adjunct curator for space history at the Museum of Flight. "Starting in 1945 with Operation Paperclip [which brought German rocket pioneers to the U.S.] and going through to the race to the moon, the exhibit will extend into the 1970s, as we started shifting away from the moon and back to the space shuttle." [Jeff Bezos' Salvaged Saturn V Rocket Engines in Photos]

The space race exhibit will include a lunar roving "moon buggy," the only built-for-flight Viking Mars lander on Earth, spacesuits and the first Apollo spacecraft built for NASA. It will also feature the debut of long-lost rocket engines that launched astronauts to the moon almost 50 years ago.

"Telling the F-1 engine story is a big focus of the exhibit," said Nunn in an interview with collectSPACE.com.

The museum will showcase the massive Saturn V engine parts that boosted the Apollo 12 and Apollo 16 missions in 1969 and 1972 respectively, and then sat at the bottom of the Atlantic for 43 years. The aged and sculptural artifacts, now stabilized and conserved, were discovered and raised off the ocean floor by Seattle-based Bezos Expeditions, in an effort led by Amazon CEO and Blue Origin founder Jeff Bezos in 2013.

At Bezos' request and with NASA's agreement, the engine components will now solemnly punctuate the space race exhibit.

"The engines' display will be sort of like an exploded-view engineering drawing, but using the actual parts," described Nunn. "This will provide the context of what the assembly would look like as a whole, but it will also allow visitors to view some of the internal components."

That some of the F-1 engine parts are from Apollo 12, the second lunar landing mission, lends itself to another major focus of the new exhibit.

"One of the more interesting aspects of this exhibit is that we have a lot of material from Pete Conrad," Nunn said, referring to the late Apollo 12 commander. "So we're going to be using that and Conrad is going to be a biographical character throughout the display."

The museum earlier previewed some of Conrad's personal artifacts as part of a temporary exhibit that celebrated the 50th anniversary of his Gemini 5 mission in August 2015. Now those pieces will join others from the full span of his spaceflight career as a way to lead the public through the history of NASA's Mercury, Gemini and Apollo programs.

Founded in 1965, the Museum of Flight serves more than half a million visitors each year. The museum's collection includes more than 160 airplanes and spacecraft, including the only full-length NASA space shuttle crew trainer.

The space race exhibit in the T.A. Wilson Great Gallery will compliment the Museum of Flight's existing Charles Simonyi Space Gallery, which will continue to tell the history of the shuttle, as well as the latest in current and future spaceflight.