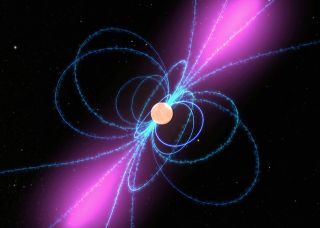 An artist's illustration of a pulsar, a fast-spinning neutron star that fires off powerful beacons of light. Scientists have found two strange pulsars that seem to perform a "cosmic vanishing act."
(Image: © NASA)

Pulsars are extremely dense neutron stars that form when massive stars collapse. They are known for releasing rapid, even pulses of radiation as they spin. But these two newly discovered Milky Way pulsars do something stranger: They suddenly begin firing off radio waves consistently, only to abruptly "turn back off" again and disappear from radio telescopes' view. In this "cosmic vanishing act," one of these pulsars appears "on" for only 30 percent of the time, while the other dips as low as 0.8 percent, scientists said in a new study describing the findings.

The strange sparklers can help illuminate the processes that cause pulsars to emit light, and hint at hundreds of pulsars not yet found, the scientists said. [Pulsars - What Are They? (Video)]

The two newly discovered pulsars appear eerily normal when they're releasing light, showing no sign of their irregular nature, said Victoria Kaspi, an astronomer at McGill University in Montreal.

"When they're on, they're not particularly dim — you wouldn't know that they have this dual personality," said Kaspi, who is also the principal investigator of the Arecibo Observatory's PALFA survey, which first identified the pulsars. She presented the results yesterday (Jan. 4) here at the 229th meeting of the American Astronomical Society.

The Arecibo Observatory in Puerto Rico hosts an enormous radio dish 1,000 feet (300 meters) in diameter, and the PALFA survey aims to detect radio-emitting pulsars lurking in the Milky Way. Pulsars can be about 20 miles (32 kilometers) across and have the mass of 500,000 Earths, and their rapidly spinning magnetic fields cause them to release powerful jets of radiation that sweep past Earth.

"Beams of light — and, in most cases, for neutron stars' radio waves — come out of the magnetic poles, and you see one flash of this light each time the star rotates, like a little cosmic lighthouse," Kaspi said. "There's something like 2,500 of these pulsars known in the Milky Way, and they're well known for being excellent clocks, which enable all sorts of different astrophysical experiments to be done."

Most pulsars broadcast continuously, but the PALFA team — and astronomers at the University of Manchester's Jodrell Bank Observatory in the U.K. who followed up on the discoveries — found that these so-called "part-time" pulsars released radio waves only 30 percent and 0.8 percent of the time, respectively. (About a year ago, the second pulsar abruptly changed to emitting radio waves 16 percent of the time, Kaspi said.) Three additional pulsars that turn on and off intermittently are known to exist, but the others all spend more time on than off, the researchers said in a statement.

All pulsars slow down their spin very slightly with time as they lose energy, but the researchers noted that the more frequently these pulsars emit radio waves, the more they slow down. This relationship is surprising, Kaspi said, because radio waves usually make up only a tiny bit of the total energy that pulsars release. Therefore, such a drastic slowdown effect is odd, Kaspi said. Studying the pulsars can help clarify the mechanism that produces the blasts of radiation; perhaps the sudden changes is related to an irregular magnetic field and how these pulsars lose energy over time, Kaspi said. [See Inside a Pulsar (Infographic)]

Plus, the two part-time pulsars hint at many more such pulsars that researchers haven't found yet. After all, if a subset of pulsars are emitting radio waves only 1 percent of the time, that would mean that, each time astronomers looked, they would find only one out of every 100 of that type, Kaspi said. (Moreover, that pulsar would likely be gone by the time researchers went to double-check its existence.)

"This implies that the known Milky Way radio pulsar population is far more incomplete than we thought," Kaspi said. "And it's difficult to estimate how many are as yet unseen, since we don't know the distribution of the 'on' fractions. There could be pulsars that have even smaller 'on' fractions, which would indicate that we're just detecting the tip of an iceberg."

The new work was detailed Jan. 4 in The Astrophysical Journal. In addition to the pulsar discovery, the PALFA survey was also the first to identify a mysterious fast radio burst whose source was announced yesterday at AAS.