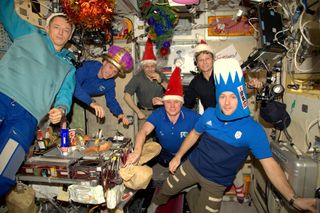 Happy New Year from the International Space Station! Although the orbiting lab operates on Universal Time, Expedition 50 crewmembers celebrated the New Year at midnight in three different time zones, each corresponding to their homes in the United States, Russia and France.
(Image: © ESA/NASA)

Six crewmembers aboard the orbiting laboratory celebrated the start of 2017 after finishing their last few days of 2016 goofing around and working hard.

Two NASA astronauts, three Russian cosmonauts and one French astronaut all rang in the new year together at 0000 GMT (i.e., midnight) — the designated time zone at the International Space Station (ISS) — which was 7 p.m. EST on New Year's Eve. "Wishing everyone on Earth a Happy New Year from 250 miles above our planet!" NASA astronaut Shane Kimbrough, the station's commander, wrote on Twitter Saturday (Dec. 31). [Holidays in Space: An Astronaut Photo Album]

Though the ISS crewmembers — NASA astronauts Peggy Whitson and Kimbrough; Russian cosmonauts Oleg Novitskiy,Andrei Borisenko and Sergei Ryzhikov; and French astronaut Thomas Pesquet — still had to work between Christmas and the new year, they seemed to find plenty of time to enjoy the holidays and have a little fun.

"The crew has their typical off-duty time, since it's a weekend on New Year's Eve and Day," NASA spokesman Dan Huot told Space.com. "They will also have Monday, Jan. 2 off." The crew also enjoyed an extra off-duty day Monday (Dec. 26) after celebrating Christmas aboard the orbiting lab.

"The sprawling city of Houston, TX, home of @NASA-JSC and of many of my friends. Have a great party tonight, see you in 2017!" Pesquet wrote.

NASA astronaut Peggy Whitsontweeted a photo of an intense cookie-decorating contest between Pesquet and Novitskiy. The results of the match were never disclosed, so let's just say these two zero-g cookie decorators are both winners.

Pesquet also found some time to practice his juggling — something that isn't as easy to do without gravity as you might think. When he tweeted the photo, he wrote, "Juggling in space initially seems much easier than on earth… except nothing falls back down, so it's all but impossible!"

On Thursday (Dec. 29), the crew took the "mannequin challenge" to new heights, posing motionless while floating in microgravity. Pesquet shared a video of the whole charade on Twitter.

Pesquet, who is now two months into his first trip to space, seems to be having a lot of fun playing with his food in microgravity. Can you blame him? On Friday (Dec. 30), he tweeted a video of a floating "burger" made with homegrown lettuce from the ISS!

Though everyone on the space station seems to have had a jolly time during the last week of 2016, it wasn't all fun and games the entire time. Tuesday through Friday were spent working as usual, running tests and doing science experiments.

Even on holidays, crewmembers have to spend at least 2 hours a day exercising to maintain their muscle mass, which would otherwise dwindle in zero gravity. Unlike many folks on Earth, these space travelers probably won't be hitting the gym any harder to lose those holiday pounds. With carefully portioned meals, crewmembers at the ISS don't have to worry about gaining weight over the holidays — even after those cookie-decorating contests.