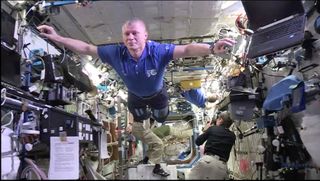 Expedition 50 crewmembers take on the #MannequinChallenge!
(Image: © Screenshot from @Thom_astro via Twitter)

If you haven't heard by now, a new viral phenomenon has hit the Internet. The initial Mannequin Challenge is credited to students in Jacksonville, Florida, but has spread across the globe and videos have grown more complicated and intricate.

So what is the challenge? A group of people freeze in action, like mannequins, while a camera — in motion — maneuvers around and among them capturing the scene.

And now, the Mannequin Challenge has made its cosmic debut!

Crewmembers on the International Space Station have recorded their own version of the Mannequin Challenge.

Expedition 50 crewmembers took on the challenge with gusto. From NASA, Robert Kimbrough froze mid-exercise while Peggy Whitson shot some photos. From Roscosmos Oleg Novitskiy floated, frozen while passing through the corridor, and Andrei Borisenko and Sergey Ryzhikov looked hard at work in various positions. ESA's Thomas Pesquet filmed the scene.