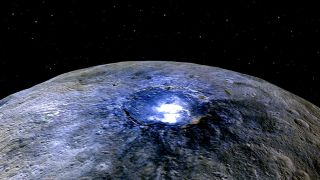 Ceres, the largest body in the main asteroid belt, is pocketed with cold, dark craters, several of which are layered in ice, raising the prospects that this frigid dwarf planet once had perhaps an ocean's worth of liquid water early in its history when the solar system was still forming.

Dawn began its extended mission phase at Ceres in July, following a visit to the neighboring protoplanet Vesta, and has been sending back copious amounts of data that have allowed mission scientists to create a more intricate picture of the surface and subsurface environments. As the closest dwarf planet to the sun and about a third the size of our moon, Ceres is considered a bridge between the inner and outer solar system and offers a window into the role of water in the evolution of the planets. [Amazing Photos of Dwarf Planet Ceres]

"The Dawn mission is trying to look back in time to the very earliest stage of the solar system. We're interested in what happened right up to when Ceres accreted water and it separated from the granular material," said Carol Raymond, the deputy principal investigator of the Dawn mission at NASA's Jet Propulsion Laboratory in Pasadena, California.

"We can't investigate the habitable environment of Ceres other than to look for chemical fingerprints on the surface or shallow subsurface," Raymond added. "We have ample evidence to say the presence of an ocean on the surface was likely."

Raymond said newly published research is supporting the theory that ice separated from rock early on in Ceres' past and formed a rocky core covered by an ice-rich crystal layer that has persisted throughout its history. Water, of course, is an essential ingredient for life as we know it, and finding evidence of water-rich bodies from the distant past can offer clues to where life might have existed in the early solar system.

Using Dawn's gamma ray and neutron detector instrument (GraND), scientists were able to determine that Ceres' poles are abundant in hydrogen, likely in the form of frozen water mixed into the pores of rocky materials, rather than a solid icy layer. The uniformity of the hydrogen layer suggests that the processes that produced it once acted globally across the dwarf planet, researchers said.

In the far northern hemisphere of Ceres, scientists also closely examined several cold, dark craters called "cold traps" and found that bright spots residing there are comprised of ice. Persistent shadowing casts these spots in near universal darkness, making them so chilly at minus 250 degrees Fahrenheit (minus 157 degrees Celsius) that very little of the ice would have turned into vapor over the course of a billion years, mission team members said.

Norbert Schorghofer, an astronomer at the University of Hawaii, Manoa, who studied the cold traps, said he's uncertain whether the ice came from Ceres' own ice-rich crust or whether it was delivered from space by impacting bodies, as is believed to have occurred in small ice traps on Earth's moon and on Mercury.

"In any case, Ceres shows us that ice does get caught in these cold traps," he said.

Perhaps the best-known area on Ceres is the 57-mile-wide (92 kilometers) crater Occator, where scientists have discovered the source of the bright spots as highly reflective salts. "The question is, where is the material in this impact coming from?" said Ralph Jaumann, a planetary scientist at the German Aerospace Center. He speculates that the impact that created the crater could have triggered an upwelling of a briny liquid from inside Ceres, which flowed out, froze and then vaporized, leaving behind the salts.

Dawn entered orbit around Ceres in March 2015, reaching its lowest altitude that December at 240 miles (400 km), where it was able to photograph 90 percent of the surface. Dawn is currently on its sixth science orbit at more than 4,500 miles (7,240 km) above the surface, a vantage point that's allowing the measurement of cosmic rays. The main purpose is to eliminate the "noise" radiation from space to allow for more accurate GRaND detector measurements, mission team members said.