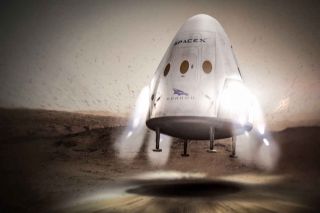 NASA wants to wait until SpaceX proves it can pull off a soft landing on the Red Planet before committing millions of dollars' worth of equipment to the spaceflight company's "Red Dragon" effort, said Jim Green, head of the agency's Planetary Science Division.

"Landing on Mars is hard," Green said during a talk Tuesday (Dec. 13) here at the annual fall meeting of the American Geophysical Union (AGU). "I want to wait this one out." [SpaceX's Red Dragon Mars Mission in Images]

SpaceX founder and CEO Elon Musk has said the company plans to launch uncrewed Dragon capsules toward the Red Planet at every launch opportunity for the foreseeable future, ideally beginning in 2018. (Such windows come just once every 26 months, when Earth and Mars align favorably.)

The main goal is to practice landing heavy payloads on Mars, to help pave the way for human settlement there — a long-standing priority for Musk. The Red Dragon missions also should have significant scientific returns, since they'll allow researchers to send a variety of gear to the Red Planet, Musk has said.

NASA will take advantage of such opportunities, as soon as the first Red Dragon is in the books, Green said.

"I can't wait for it to be successful, because it opens up our opportunities to deliver important science instruments into the Mars environment," he said.

NASA is providing technical support to the first Red Dragon mission in a number of areas, via an unfunded Space Act Agreement. The space agency will get something out of the deal as well: access to most of the data gathered during Dragon's landing on Mars.

The capsule will use "supersonic retropropulsion" to pull off this touchdown. Dragon will slam into the Martian atmosphere going far faster than the speed of sound; to slow down enough to land, it will rely not on parachutes but rather its onboard SuperDraco thrusters.

No other Mars spacecraft has ever employed this strategy, which is why NASA is so keen to see how it works. Like SpaceX, NASA aims to put boots on the Red Planet, and agency engineers have determined that supersonic retropropulsion will be a key part of any crewed Mars mission's landing architecture, NASA officials have said. (The "sky crane" system that put the agency's car-size Curiosity rover down in 2012 was pretty much maxed out by the robot's 1-ton bulk, and human Mars missions will require the landing of much heavier payloads, agency officials have said.)