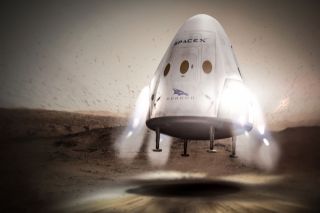 "Mars Colonial Transporter" seems like a pretty cool name for a spaceship, but it wasn't quite ambitious enough for SpaceX founder and CEO Elon Musk.

"Turns out MCT can go well beyond Mars, so will need a new name," the billionaire entrepreneur said Friday (Sept. 16) via his Twitter account, @elonmusk, referring to the spaceflight system that SpaceX is building to colonize the Red Planet.

Some of Musk's 5.24 million Twitter followers took up the challenge and offered their own suggestions, including "Indestructible II," "Millenium," "Booster McBoosterface" and "Heart of Gold." [SpaceX's Red DragonMars Mission in Images]

This last offering was also the name of a ship in Douglas Adams' iconic sci-fi novel "A Hitchhiker's Guide to the Galaxy," which is apparently close to Musk's heart.

"That is my favorite fictional spaceship. Powered by improbability!" Musk tweeted Friday.

But, in a series of tweets on Saturday (Sept. 17), Musk announced that he had settled on "Interplanetary Transport System," or ITS. In one of those tweets, Musk reminded his followers that SpaceX will be unveiling details of the colonial transporter next week at the International Astronautical Congress (IAC) in Guadalajara, Mexico.

That same tweet also provided what Musk described as a preview of the IAC talk: a link to a clip from 2014's "The Lego Movie" that showed the film's 1980s astronaut character building, and flying, his Lego spaceship with great enthusiasm. (The tiny yellow fellow yells "Spaceship!" quite a bit.)

Musk has said repeatedly that he founded SpaceX in 2002 primarily to colonize Mars and thereby make humanity a multiplanet species.

The company plans to launch an uncrewed mission to the Red Planet in 2018 using SpaceX's Dragon capsule and Falcon Heavy rocket, then follow that up with additional missions every 26 months for the foreseeable future, Musk has said. (Earth and Mars align to make launches feasible just once every 26 months.)

If all goes according to plan, the Interplanetary Transport System will launch people toward the Red Planet for the first time in 2024. And, based on the new name, SpaceX may also be planning to send astronauts even farther afield in the future. We'll all just have to wait and see what Musk says during his IAC talk, which is scheduled to take place Sept. 27.