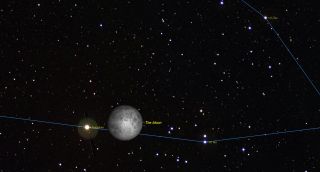 Whenever the full moon is in the sky, many kinds of astronomical observation must be postponed. But weather permitting, a special treat is in store on such a night tonight (Dec. 12).

Across most of the United States (excluding Alaska), as well as southern and eastern sections of Canada, observers can watch the moon pass in front of the bright orange star Aldebaran. Strictly speaking, the moon will not be "full," but will be less than one day before full and 99-percent illuminated.

For the western U.S., this is an early evening event; for the eastern U.S. it happens around the middle of the night. Aldebaran will appear to move toward the bright eastern (left) limb of the moon. Usually, the brilliant moon would wash out any star near full, but Aldebaran should remain visible with only slight optical aid, even during egress.

High magnification through a good telescope should give the best view of Aldebaran in the final few seconds before it suddenly winks out of sight behind the slight sliver (called the "phase defect") of darkness. About an hour later the star will reappear just as suddenly on the opposite side of moon's disk. [December's Supermoon Full Moon: How & When to See It]

Local circumstances for nearly 1,200 locations, as well as a map showing the complete visibility zone of this event can be found here.

You can time the disappearance and reappearance of Aldebaran very precisely just by holding a smart phone or video camera to the eyepiece of a telescope while shortwave radio time signals play in the background.

Start early; you might find that you actually need to overexpose the moon a bit to bring out Aldebaran. The International Occultation Timers Association (IOTA) is always desirous of receiving such video observations.  See: http://occultations.org/observing/observing-basics/.

Some will witness just a glancing blow

From the map here, you'll see a different viewpoint of the visibility zone of this occultation. It contains a Google interactive map that depicts the southern limit of the occultation which will sweep across south-central Florida at around 4:30 UT on Tuesday, Dec. 12, which corresponds to 11:30 p.m. EST tonight.  The southern limit is actually a path, probably less than a dozen miles in width, within which telescope userscan see Aldebaran vanish and reappear several times as the mountainous limb of the moon glides by. Locations south of the path (such as Fort Myers, West Palm Beach, and Miami) will merely see a near miss.

Currently the moon in its path across the sky is crossing in front of Aldebaran every month, though the visibility zones are oriented to differing regions around the world. The current run of Aldebaran occultations had a beginning and will ultimately have an end. The current series began Jan. 29, 2015, with an occultation visible from the Arctic regions.

The next Aldebaran occultation visible from the United States (and Hawaii, too) will come on the evening of March 4, 2017. We have just passed the halfway point of the current series, which will come to an end Sept. 3, 2018, for Greenland and the Arctic regions. After that, we’ll have to wait until Aug. 18, 2033, for the next series of Aldebaran occultations to begin.