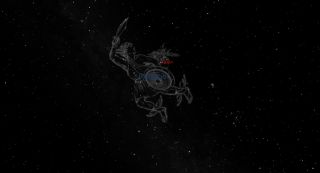 There is an apocryphal story, dating back to the mid-18th century, about a famous Paris astronomer who would stand on one of the Seine bridges on nights when the variable star Algol was in eclipse, to point out this remarkable phenomenon to passersby.

Today, more than 250 years later, the periodic brightness changes of Algol remain a fascinating sight to anyone who knows when to look and what to look for. And for skywatchers in the Northern Hemisphere, the star can be found high overhead around 10:30 p.m. local time.

Algol is in the constellation of Perseus, the Hero. To some, the constellation resembles an inverted fleur-de-lis (a stylized three-petal lily or iris, used in France as an armorial emblem). One branch curves toward the bright star Capella, the center points to the Pleiades, and the third ends in two stars, one of which is Algol, the so-called "Demon Star," one of the most famous variable stars in the sky (meaning one that changes in apparent brightness). [How to Choose the Best Telescope for Your Money]

Algol is derived from the Arabic word meaning "prankster." The English word "ghoul" comes from the same source. Some believe the star Algol is so called because it seems to periodically "wink," (like a prankster might). Thus, its name seems to suggest that the medieval Arabs were perhaps aware of its marked changes in brightness.

In 1782, amateur astronomer John Goodricke (1764-1786) realized that this star was really a pair of stars orbiting a common center of gravity, and that when the dimmer of the two crossed in front of the other, the light from Algol appeared to fade. Because the entire eclipse takes 9 hours and 40 minutes from start to finish, it's possible to see the star dim and then return to peak brightness in a single night when the timing is right. This stellar eclipse occurs like clockwork at intervals of 68 hours and 48 minutes. Recent observations have shown that this interval can sometimes vary by a few minutes, but predictions of future eclipses are still quite accurate.

Algol is 510 light-years from Earth. Normally, it appears 3.3 times brighter than during the peak of the eclipse (when it is dimmest); it usually shines at magnitude 2.1, about equal to the star Almach (Gamma Andromedae). But when Algol is at minimum light, it fades to about magnitude 3.3, or about equal to Alpha Trianguli. While diminished light lasts nearly 10 hours, the eclipse begins and ends so gradually that most of the fading and subsequent brightening takes place within the 2 hours before and 2 hours after mid-eclipse.

This week, Algol can be found almost directly overhead around 10:30 p.m. local time. When darkness falls during the early evening hours it can be found about halfway up in the northeast sky. After its overhead passage, it spends the rest of the night slowly descending into the northwest sky, and will be quite low to the horizon at the break of dawn.

The table below gives the dates and local times for the next six eclipses that can be observed from parts of North America. When an asterisk (*) is used, it means that the eclipse will occur not on the date listed, but on the previous calendar day. "N.O." stands for "Not Observable," since the eclipse takes place too near to sunset and the sky will simply be too bright to see the star.

Two hours before the predicted minimum, start checking Algol's brightness. If you are observing casually, a look every half hour is sufficient; if you are trying to determine the time of mid-eclipse, 10-minute intervals are better. Algol is at minimum light for about 20 minutes — as the large, dim star passes across the smaller, brighter one — then it gradually returns to normal.