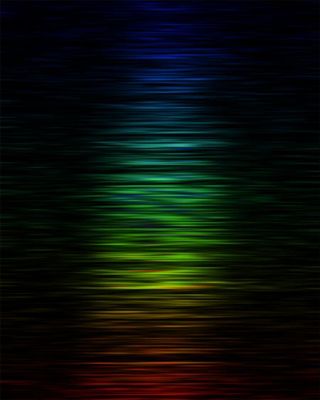 The intensity of the light from FRB 150807 is displayed in this graph. Red corresponds to lower frequencies of radio waves, and blue indicates higher frequencies. The x-axis is time, revealing how the radio waves brighten and then fade away. According to a statement from Caltech, "The fine structure in the burst is the scintillation, or twinkling — the rays interfere constructively and destructively differently at different frequencies. This pattern provides insights into the turbulence in plasma towards the burst."
(Image: © Courtesy of V. Ravi/Caltech)

An extraordinarily luminous fast radio burst (FBR) — a brief, powerful emission of radio waves from a distant cosmic source — has revealed new clues about the web of matter that stretches between galaxies, according to a new study.

The newly observed FRB, called FRB 150807, is the most luminous FRB found to date, the researchers said.

As the light from an FBR travels through space, it is distorted by the intergalactic material it passes through. Based on the brightness of the bursts, researchers can estimate how far the light has traveled and then study the intervening regions of the universe.

"Because FRBs like the one we discovered occur billions of light-years away, they help us study the universe between us and them," Vikram Ravi, a co-author of the study and a postdoctoral scholar at the California Institute of Technology (Caltech), said in a statement. "Nearly half of all visible matter is thought to be thinly spread throughout intergalactic space. Although this matter is not normally visible to telescopes, it can be studied using FRBs." [Mysterious 'Fast Radio Burst' Source Detected (Video)]

Only 18 FRBs have been detected to date, and astronomers are still unsure what cosmic event or object produces them.

A team of researchers detected FRB 150807 while using the Parkes radio telescope in Australia to monitor a nearby pulsar in our own galaxy. (Pulsars are a type of neutron star, a dense nugget of material left over after a star collapses.) Based on the brightness of FRB 150807, the researchers were able to localize the burst more accurately than they have in the past, according to the statement from Caltech.

The study of FRB 150807 has provided "the first direct insight into turbulence in intergalactic medium," according to the statement. So far, in the direction of FRB 150807, the turbulence levels are not above what theories have predicted, which is a good sign that scientists are on the right track in understanding this material.

The Deep Synoptic Array prototype, which comprises 10 radio dishes in California and is expected to make its debut in February 2017, will make it easier to detect and locate FRBs, Ravi said.

"We estimate that there are between 2,000 and 10,000 FRBs occurring in the sky every day," Ravi said in the statement. "One in 10 of these are as bright as FRB 150807, and the Deep Synoptic Array prototype will be able to pinpoint their locations to individual galaxies. Measuring the distances to these galaxies enables us to use FRBs to weigh the tenuous intergalactic material."