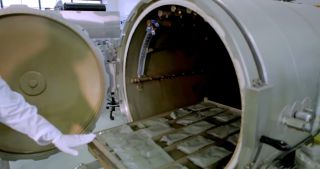 In a new video, Texas A&M researchers demonstrate how food is prepared for launch to the International Space Station. Here, a heat process sterilizes the inside of the food packets so they'll last a long time at room temperature.
(Image: © Texas A&M)

The foil-clad portions of turkey, mashed potatoes and cherry-blueberry cobbler aboard the International Space Station might not look much like a traditional Thanksgiving meal, but they hearken back to the Earthbound feast — and the food is made on Earth, too, much of it at the Space Food Research Facility at Texas A&M University.

A new video from the university takes a look at the process of packaging and choosing that food. The video features university chancellor John Sharp and food scientist Ben O'Neill, plus a perspective from former space shuttle astronaut Bonnie Dunbar, now an aerospace engineering professor at the university.

"The food that is consumed in space, including at the International Space Station right now, is made right here on the West Campus at Texas A&M University," Sharp said in the video. "And these are some of the samples of that." [Space Food Evolution: How Astronaut Chow Has Changed (Photos)]

According to the space station's current commander, NASA astronaut Shane Kimbrough, Thanksgiving will be a workday for astronauts this year — but he and fellow NASA astronaut Peggy Whitson will still share a festive meal with French astronaut Thomas Pesquet and Russian cosmonauts Oleg Novitskiy, Andrei Borisenko and Sergei Ryzhikov. In a recent video, he showed off his Thanksgiving meal, all stored in a medium-size plastic bag: a pouch full of turkey, cherry-blueberry cobbler, candied yams, and dehydrated cornbread dressing, green beans and mushrooms, mashed potatoes, and sweet tea with lemon.

In the Texas A&M video, the researchers go over the steps of meal preparation done in the lab: producing the ready-to-eat meal packages, preparing the food, packaging it, heat-sealing the package, and running the food through a heat-processing step to sterilize the food inside the pouch. Because of this step, the food has a very long shelf life. (However, after the best-if-used-by date, the food might not retain the best texture and composition, according to a recent Facebook Live interview with NASA's Space Food Systems lab at Johnson Space Center in Texas.)

Over the course of her five shuttle missions, Dunbar had the chance to become very familiar with the food in space.

"Before the flight, we go to the kitchens at the Johnson Space Center, and we have the opportunity to taste all the foods," Dunbar said in the video. "When we fly, our meals are color-coded for us. So I know what my meal looks like every day that I should be on flight."

Dunbar described how she would eat the astronauts' out-of-this-world turkey: heat it up in the packet, using a briefcase-like food warmer on the station; cut off the corner; and eat it out of the pouch to keep all the juices contained — or else Thanksgiving cleanup turns into quite a challenge.

"Otherwise, it's in a weightless environment, floating everywhere," she said.