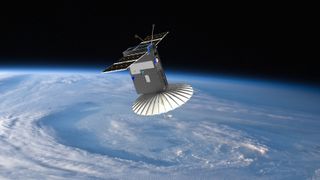 NASA challenged engineers to pack an entire satellite dish into a cereal box with Radar in a CubeSat (RainCube), a technology-demonstration mission scheduled for launch in 2017 that will measure rain and snowfall on Earth from space.

Until now, most satellite dishes have been parabolic, which means that bigger dishes led to better radio transmissions. But radio-frequency engineers have been known to call the forces guiding communications over the air "black magic" because of their complicated physics, NASA said in a statement — and new CubeSat technology must fit that magic into a new, tiny package.

CubeSats are spacecraft designed to be light, cheap and extremely small; most aren't much bigger than a cereal box.

"It's like pulling a rabbit out of a hat," Nacer Chahat, a specialist in antenna design at NASA's Jet Propulsion Laboratory (JPL), said in the statement. "As space engineers, we usually have lots of volume, so building antennas packed into a small volume isn't something we're trained to do."

Chahat and his team worked with a CubeSat team on the design for RainCube, which is something like an umbrella stuffed into a jack-in-the-box, NASA said in the statement. When the cube opens, an antenna pops out and its ribs extend from a canister to spread out a golden mesh. The RainCube antenna has to be small enough to be crammed into a 1.5U container (1U, a CubeSat unit, is roughly equivalent to a 4-inch cubic box, or 10 x 10 x 10 cubic centimeters).

"Large, deployable antennas that can be stowed in a small volume are a key technology for radar missions," JPL's Eva Peral, principal investigator for RainCube, said in the statement.

RainCube's antenna relies on the high-frequency Ka-band wavelength, a rare choice for current CubeSats. Besides working with smaller antennas, that wavelength allows for a large increase in data transfer over long distances because of its higher frequency, making it the perfect tool for telecommunications, NASA said in the statement.

While most CubeSats have been limited to simple studies in near-Earth orbit, RainCube's technology could help scientists eventually use CubeSats much farther away, reporting back from Mars or beyond.

"To enable the next step in CubeSat evolution, you need this kind of technology," said JPL's Jonathan Sauder, mechanical engineer lead for the RainCube antenna.