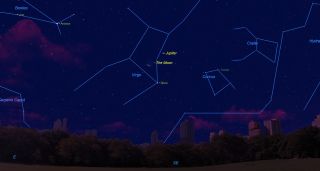 Thursday, Nov. 24 and Friday, Nov. 25 will present stunning predawn views of the moon near bright Jupiter. Here, low in the eastern predawn sky on Nov. 25, the sliver of the old crescent moon sits less than 4 degrees to the lower left of Jupiter. The pair of objects will be most easily visible between 4 a.m. and 7 a.m. local time.
(Image: © Starry Night Software)

If you get up early Thursday morning (Nov. 24) to stuff the turkey, or shop at the crack of dawn on Friday (Nov. 25), you will be able to spot the crescent moon that's passing near Jupiter, the planet now appearing as a bright morning star.

Thursday, of course, is Thanksgiving Day, which is considered by many to be the most-traveled day of the year. More than 40 million Americans will carve out time to visit friends and family, and a fair percentage of them will likely already be on the road by daybreak. The day after Thanksgiving (Friday) is known as Black Friday — the start of the holiday shopping season. To attract consumers — and many will be up before the sun — almost all stores hold sales that start during the predawn hours.

And if you plan to be among those who will be up and about early on these mornings, make sure you cast a glance toward the southeast part of the sky about 60 to 90 minutes before sunrise. [Related: How Thanksgiving Meals for Astronauts Are Made]

At that early hour, your eyes will immediately be drawn to the two brightest objects in the sky.

On the morning of both Thanksgiving and Black Friday, you will first see the moon, which will appear as a slender, sunlit crescent, with the rest of its disk possibly glowing with a faint, blue-gray hue. That's Earthshine, a phenomenon that's caused by sunlight reflected off the Earth and then back out into space toward the moon. If you have binoculars or a small, low-power telescope, be sure to check out the moon, and it will appear very much like a weirdly illuminated — and very much three-dimensional — ball that's suspended in space.

On both mornings, a dazzling, silvery nontwinkling "star" will appear not too far from the moon. This is in fact not a star, but a planet — Jupiter, the biggest in our solar system. Shining at magnitude -1.8, it's noticeably brighter than Sirius, the brightest star in the night sky. On Thanksgiving morning, the moon, 21 percent illuminated, will hover about 8 degrees to the upper right of Jupiter. On Black Friday morning, the crescent will have slimmed down to 14 percent, and it will have shifted about 5 degrees to the lower left of Jupiter, or about half the width of your clenched fist when it's held at arm's length.

Jupiter, the king of the planets, is currently in the dim constellation of Virgo and is positioned about 9 degrees above Virgo's brightest star, the bluish first-magnitude Spica. In fact, on Black Friday morning, the crescent moon, Jupiter and Spica will appear to form a scalene triangle, with the Jupiter-Spica side 9 degrees long, the moon-Spica side 7 degrees long and the moon-Jupiter side 5 degrees in length.

"Big Jupe" rises just before 3:00 a.m. local standard time, but its rising time will be getting earlier by an average of 3 minutes per day, so that by Christmas Eve it will be rising before 1:30 a.m. The giant planet will shine brightly, low in the east-southeast sky. Its four Galilean moons will be visible to observers with the smallest telescopes — providing a dramatic end to many a late-night observing session as we get ready to move into the cold nights of December.

Jupiter does not get high enough in the sky for steady telescopic viewing until just after dawn's first light. But if you train a telescope — or even steadily held binoculars — on Jupiter on Thanksgiving morning, you will see a pair of moons (Io and Europa) close to Jupiter on one side, a third moon (Ganymede) on the other side of Jupiter — though Ganymede will be much farther away. And seemingly skimming just above Jupiter's disk will be the fourth Galilean satellite, Callisto.

Come the following morning, the arrangement will have changed: Europa will be a loner, sitting by itself on one side of Jupiter, while the three other moons (moving out from Jupiter, Io, Callisto and Ganymede) will form a triangle on the other side.

Add our own satellite, and that's five moons for the price of one!