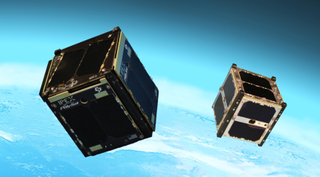 NASA's new associate administrator for science sees smallsats as one way to incorporate innovation into his directorate's programs.
(Image: © NASA/JPL-Caltech)

WASHINGTON — The new head of NASA's science directorate says he wants to incorporate more innovation into its various missions, but acknowledges that there are limited opportunities to do so in the near future with current missions.

In an Oct. 31 roundtable with reporters at NASA Headquarters, Thomas Zurbuchen, named the agency's associate administrator for science Sept. 27, said he would seek opportunities to incorporate so-called "disruptive" technologies, like small satellites, into the agency's portfolio of science missions, while making sure it successfully carried out larger missions.

Zurbuchen came from the University of Michigan, where he worked on instruments for several space science missions. He also a professor of aerospace engineering there and did research on innovation, a topic he addressed in a discussion about his plans and priorities. [Watch: Satellites You Can Hold in Your Hand Spur Innovation]

"One of the things I used to worry about is whether NASA is innovative enough," he said. "Are we doing enough? I don't know. There's a lot of innovation happening already."

One potential arena for additional innovation is in small satellites. Prior to joining NASA, Zurbuchen chaired a National Academies study on the potential use of cubesats for science missions. The report concluded that there were a number of missions in a "broad range of science disciplines" that could be served by cubesats, particularly when flown in large numbers.

"I'm really interested in figuring out how we diversify our portfolio of tools," he said when asked how he might implement the recommendations of his committee's report. "There's a number of amazing opportunities that uses that kind of technology."

One example of the benefits of smallsats he cited was NASA's Cyclone Global Navigation Satellite System (CYGNSS) mission, scheduled for launch in December. CYGNSS consists of a constellation of eight smallsats that will collect ocean surface wind data that can support hurricane predictions. Other spacecraft are able to make similar measurements, he said, but the network of CYGNSS satellites will allow them to collect the data more frequently.

"This kind of disruption is what I'm looking for," he said. "How can we develop new technologies, how can we invent new architectures of missions that can go in and really do science that otherwise we can't do?"

Zurbuchen acknowledged, though, that there are limitations to that approach, in large part because NASA's science programs already have a large number of missions in progress that account for most of the agency's budget for the next few years.

He also indicated he had no plans for shaking up the science directorate, praising the people working on its various programs. "For me, that's the highest priority, to get to know the team," he said. "The team is already successful. I did not come in to a whole bunch of broken glass."