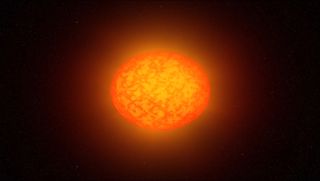 A NASA survey that combined data from the Kepler space telescope and Swift X-Ray Telescope identified 18 pumpkin-like stars, which give off intense X-ray radiation and spin so quickly they take on a distorted form.
(Image: © NASA's Goddard Space Flight Center/Scott Wiessinger, producer)

A new NASA video explains the origin of a mammoth, pumpkin-shaped star, which is blasting off powerful X-rays and spinning so fast it's squashed to look like the festive gourd.

The massive orange star, called KSw 71, is the most extreme found in a new study. It is more than 10 times the size of Earth's sun and puts out 4,000 times the peak level of X-rays the sun releases. Despite the object's girth, it rotates four times faster than the sun does.

Researchers combined data from NASA's Kepler space telescope and Swift X-Ray Telescope to search for light sources letting off intense X-rays. In addition to discovering many other features, the group found 18 hyperactive stars whose furious spins lead to an average release of 100 times the sun's X-ray radiation. [These Scary Things in Space Will Haunt Your Dreams]

"These 18 stars rotate in just a few days on average, while the sun takes nearly a month," Steve Howell, an astrophysicist at NASA's Ames Research Center in California and lead author on the new work, said in a statement. "The rapid rotation amplifies the same kind of activity we see on the sun, such as sunspots and solar flares, and essentially sends it into overdrive."

The team determined the stars' squashed shapes by measuring variations in the objects' brightness: The poles glow brighter and the equator is darker in each of these stars as rotation flattens them. (The scientists also observed the wavelengths of light released by the objects using the Palomar Observatory in California.)

A 40-year-old model offers clues to the nature of the violent dance behind such large, active stars, NASA officials said in the statement. Ronald Webbink, a researcher at the University of Illinois at Urbana-Champaign, wrote in 1976 about what would happen when one star in a binary system ran out of fuel and began to expand. That star and its partner would whirl around each other faster and faster and eventually merge, leaving behind a whole lot of gas (which would disperse over time) and one big rapidly spinning star, the researchers said. [Haunting Photos: The Spookiest Nebulas in Space]

The number of such stars spotted seems to match the predicted population well, the team said — and expanding their survey to the whole field charted by Kepler should reveal around 160 of the plump pumpkins.

The new work was detailed online Oct. 25 in The Astrophysical Journal (the print release is Nov. 1).