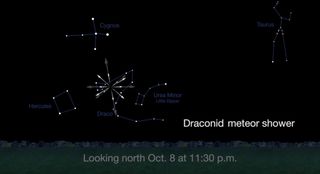 This NASA sky map for Oct. 8, 2016 shows where to look for the origin of the Draconid meteor shower in the constellation Draco in the northern sky at about 11:30 p.m. your local time.
(Image: © NASA/JPL-Caltech)

The annual Draconid meteor shower is in full swing for skywatchers this week, and you can even watch the shooting star display online tonight (Oct. 7), courtesy of the Slooh Community Observatory.

Slooh is hosting a free Draconid meteor shower webcast tonight at 8 p.m. EDT (0000 Oct. 8 GMT), featuring live video on Slooh.com from cameras in the Canary Islands, the United Kingdom and Thunder Bay, Canada. The astronomy broadcasting service will be on the air for five hours.

The Draconids occur in early October every year when the Earth goes through the stream left behind from Comet 21/P Giacobini-Zinner. This comet orbits the sun every 6.6 years.

"Viewers will also get a unique opportunity to learn how to capture this amazing meteor shower with their own standard DSLR camera, and how they can hear these streaking bits of space debris, even when they can't see them," Slooh representatives wrote in a statement.

"And for the historically inclined, the broadcast will also feature harrowing myths of dragons throughout history, including that of the Greek hero Hercules and his attempts to steal the golden apples of Zeus from the terrifying dragon Ladon, where the Draconids get their name."

"Most meteor showers peak well after midnight, but the Draconids are best seen between sunset and midnight when the radiant, the constellation Draco, is at its highest point in the sky," Slooh added.

Viewers can participate by sending questions and meteor observations to @Slooh on Twitter, or the live chat at Slooh.com.

Editor's note: If you have an amazing night sky photo you'd like to share with Space.com and our news partners for a possible story or gallery, you can send images and comments in to spacephotos@space.com.