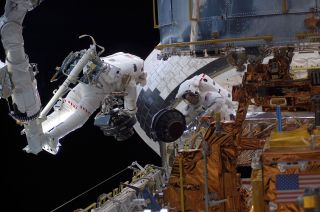 Former NASA astronaut Mike Massimino, known for flying on two space shuttle missions to repair the Hubble Space Telescope, will appear live with Space.com Oct. 4 at 3:30 p.m. EDT (1930 GMT) to discuss his new memoir and take questions about his career and what it's like in space.

The new book, "Spaceman" (Crown Archetype, 2016), coming out Oct. 4, follows the dramatic story of Massimino's path to space and what it was like to fix, in his words, "the greatest scientific instrument ever built" from an orbiting perch hundreds of miles above Earth. You can tune in to the live discussion on Space.com's Facebook page.

The video will appear on the Facebook feed starting right at 3:30 p.m. EDT (1930 GMT), and you can post questions in the comments for him to answer. [Read an excerpt of "Spaceman" here.]

Since his time at NASA, Massimino has proven a devoted science communicator — he is the senior advisor for space programs at the Intrepid Sea, Air and Space Museum, teaches at Columbia University and even appeared on CBS' "The Big Bang Theory". In "Spaceman," he details the challenges and successes of his work with NASA, and offers a vivid look at what it's like to go to space.