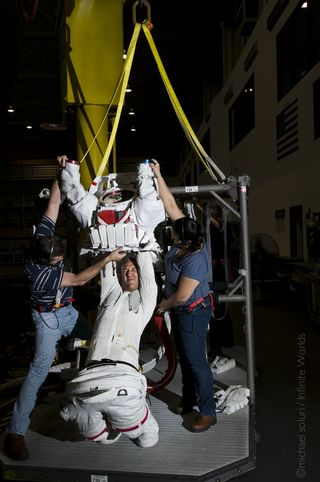 NASA Astronaut Michael Massimino struggles into his spacesuit with the help of two others in the leadup to the final Hubble Space Telescope servicing mission.
(Image: © © Michael Soluri/Infinite Worlds)

Retired astronaut Mike Massimino, who flew on two shuttle missions to repair the Hubble Space Telescope, describes his path to space and what the job was like in a new memoir, coming out in October — and Massimino is offering a special gift to those who preorder the book.

"Spaceman" (Crown Publishers, 2016), will be released Oct. 4. Massimino announced the thank-you gift on Twitter — he was also the first astronaut to tweet from space. He promised a signed bookplate sticker and model of the space shuttle Enterprise to eager readers. You can preorder the book and snag the gifts here.

Massimino never flew in the space shuttle Enterprise to space; in fact, nobody did. Enterprise was the first space shuttle built by NASA, but the agency used that craft only for atmospheric tests by carrying it on, and later releasing it from, the top of on aircraft. Some of those flights were crewed, but Enterprise never left Earth's protective atmosphere.

Massimino did fly on two space shuttles: Columbia, for STS-109, and Atlantis, for STS-125. Both missions were to repair the orbiting Hubble Space Telescope, and STS-125 was the final time humans visited the telescope, and also the last time astronauts ventured further into space than the International Space Station's low-Earth orbit. Massimino describes both of the flights in detail in "Spaceman," including vivid descriptions of what it's like to spacewalk with the whole sphere of Earth shining below — plus the unlikely story of how he came to be there.