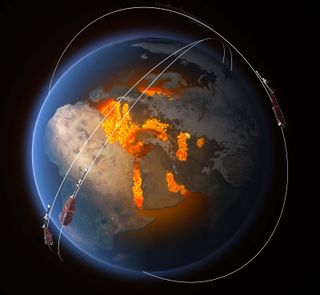 The European Space Agency's three Swarm satellites observe magnetic signals that originate in Earth's core, mantle, crust and oceans, as well as its ionosphere and magnetosphere. This artist's concept shows the satellites in orbit and depicts Earth's superheated iron core about 1,900 miles (3,000 kilometers) below the surface. The spinning of the molten iron core is thought to generate the bulk of Earth's magnetic field.
(Image: © ESA/ATG medialab)

Earth's ocean creates little magnetic fields that ebb and flow along with the tides, and a new study explains how measuring these magnetic fields with satellites can reveal information about the planet's interior structure and composition.

When salty solids dissolve in seawater, they break down into ions, or charged particles that conduct electricity and interact with Earth's magnetic field. Motion of the ocean turns a sea of charges into electric currents that generate much smaller magnetic fields via a process called "motional induction."

Satellites that monitor Earth's primary magnetic field can also detect these subtle, secondary magnetic signals, previous research has shown. And while some scientists have proposed using this data to study the structure of Earth's subsurface structure, exactly how that could be done has remained an open question — until now.

A team of researchers from around the world has mapped the electrical structure of Earth's lithosphere — or the crust and upper mantle — to a depth of about 155 miles (250 kilometers). They used 12 years of satellite data from several internationally cooperative projects, including the Challenging Mini-Satellite Payload (CHAMP), the Ørsted geomagnetic mission and the Scientific Application Satellite-C (SAC-C).

"There are not that many ways to 'look' inside our planet," Alexander Grayver, a geophysicist at the Swiss Federal Institute of Technology (ETH Zurich) in Zürich, Switzerland, and lead author of the research paper told Space.com. "Electrical conductivity is one of the very few properties we can sense at depths. Since electrical conductivity of a rock depends on its temperature, water content, pressure and mineral composition, we use it as a proxy to infer this information." Understanding the conductivity of Earth's interior can help scientists learn more about the evolution of our planet, the forces that drive tectonic plates to cause earthquakes, and even volcanic eruptions, Grayver said.

He also explained that this satellite-observation technique could one day be useful for studying other planets and moons such as Jupiter's Europa or Ganymede, which are believed to harbor salty subsurface oceans and experience the tidal forces of Jupiter. Tidal magnetic signals should also exist there, he said.

By combining their satellite data with the models, the researchers determined that there is a layer of Earth's lithosphere and upper mantle about 45 miles (72 km) thick that is electrically resistive, meaning it doesn't conduct electric currents very well. Below that, the Earth's conductivity suddenly increases. The researchers believe that this jump in conductivity occurs at the boundary between Earth's lithosphere and a deeper layer known as the asthenosphere.

"Above the [lithosphere-asthenosphere boundary], the colder, rigid lithosphere is more resistive, whereas the asthenosphere is significantly more conductive because of its higher temperatures," the study's authors wrote.

It's possible to measure these properties of the Earth's interior without a satellite, through a process called "magnetotelluric sounding," which is done at the ocean floor. But satellites "help us tremendously to get a global view and check consistency of our theories," Grayver said.

The European Space Agency's Swarm mission, launched in 2013, will be useful for this type of research in the future as those satellites continue to collect high-quality data. Grayver said that, in the coming years, his team hopes to study more geological phenomena "such as mantle upwelling across midoceanic ridges and water content in the upper mantle using tidal magnetic signals."

This study led by Grayver was the result of a collaboration among his colleagues in Zürich, the Technical University of Denmark (DTU Space), NASA and the University of Colorado Boulder.

Details of the study were published today (Sept. 30) in the journal Science Advances.