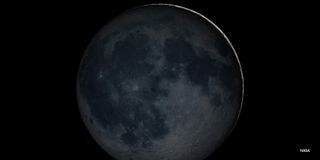 Just when you thought it was safe to go outside at night to do a little stargazing, the moon is being all weird again.

If you've been paying attention to the tabloid press, you'll likely know that Friday will play host to a "Black Moon." But you probably heard about it for all the wrong reasons.According to some outlets, this "rare" astronomical event is a signal that the world is going to come to an end and a prelude to the second coming of Jesus Christ. Why? Well, some people on social media said so.

Alas, like the last "Blood Moon," "Super Moon," "Blue Moon," "Harvest Moon" and "Monster Moon" (OK, I made that last one up), Friday's "Black Moon" is a lot less interesting than it sounds.

RELATED: Lunar Phases: The Changing Face of the Moon

Every so often, we'll experience one month that has two new moons. A new moon is the first phase of the lunar cycle, when the near-side of the moon is completely in shadow (and far side is bathed in sunlight). The new moon phase is the exact opposite of the full moon. A full moon is when the whole of the moon's face is illuminated (and the far side is in shadow). This is because, when looking up at the full moon, the sun is behind our planet, flooding the Earth-facing hemisphere in light. [Black Moon 2016: What It Is & Why You Can't See It]

In the case of the new moon, the moon is positioned between the Earth and sun, leaving the near side in darkness. We'll therefore see, well, not a lot. A couple of days after a new moon, as the lunar cycle rolls on, a thin crescent will appear (pictured top), but until then, the face of the moon will be, well, black.

More or less, the lunar cycle lasts a month (on average 29.53 days — known as a synodic month), but September this year will see two new moons, one that occurred on Sept. 1 and the other that will occur on Sept. 30. This may sound familiar; the occasional second full moon in a month is known as a "Blue Moon" — hence the saying "once in a blue moon" when describing a rare event.

It's worth noting, however, that there are other definitions of a "Black Moon" out there, so it certainly isn't an official astronomical designation. But it sounds dramatic and probably the reason why the tabloid press finds it so captivating.

Though Friday's Black Moon isn't really an astronomical phenomenon, its timing is nonetheless important to some religions and belief systems, such as Wicca. But does it foretell doom? No, unless you want to sell a lot of newspapers.