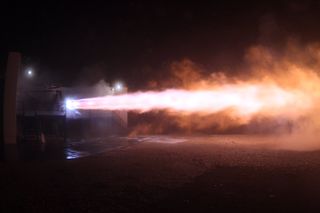 SpaceX has successfully test-fired the new Raptor rocket engine that will launch the company's planned interplanetary spaceship, according to a series of tweets from the company's CEO, Elon Musk. The engine is being developed to help propel a powerful reusable rocket to Mars and beyond as part of SpaceX's Interplanetary Transport System.

Although Musk revealed some technical details about the engine on Twitter, he promised to reveal more tomorrow (Sept. 27) at his scheduled talk at the International Astronautical Congress event in Guadalajara, Mexico. Musk did not disclose when the test had taken place.

Earlier this month, Musk took to Twitter to announce a name change for the ambitious Mars Colonial Transporter, which can go "well beyond Mars," he said in a series of tweets. The Raptor forms a vital part of the newly named Interplanetary Transport System.

Through Twitter, Musk confirmed that the engine's nozzle is about 14 feet (4.3 meters) in diameter, and that the final version will generate 3 million newtons of force, with a chamber pressure three times that of the Merlin engines that currently propel SpaceX's Falcon 9 rocket.

"Production Raptor goal is specific impulse of 382 seconds and thrust of 3 MN (~310 metric tons) at 300 bar," he wrote on Twitter. "382s is with a 150 area ratio vacuum (or Mars ambient pressure) nozzle. Will go over specs for both versions on Tues.," he clarified in another tweet

Back in 2012, Musk described the Raptor engine as working similarly to the engines that propelled NASA's space shuttles, with a two-stage cycle that is more efficient than the current Merlin engines used by the company's Falcon 9 rocket. Rather than using liquid oxygen and kerosene as fuel as the Falcon 9's engines do, Raptor will use liquid oxygen and methane to reduce energy costs as well, Musk said at the time.

SpaceX intends to launch an uncrewed Mars mission in 2018, using a Dragon space capsule and a Falcon Heavy rocket. The Interplanetary Transport System could launch humans to Mars as early as 2024 if all goes well, Musk has said.