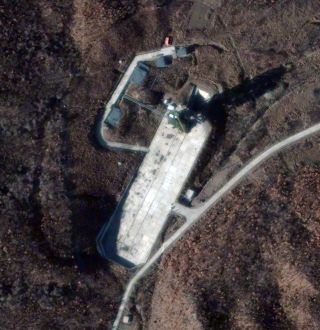 On Tuesday (Sept. 20), North Korea's state news agency reported a ground test "of a new type of high-power engine of a carrier rocket for the geostationary satellite." Geostationary satellites are located in circular orbits about 22,200 miles (35,8000 kilometers) above Earth's equator, and are often used for communications, weather and surveillance applications.

However, many observers outside North Korea see its space program as a way to develop technologies for long-range ballistic missiles. Such weapons could carry nuclear bombs, which North Korea has tested multiple times. [Images: North Korea's Rocket Program]

The new engine does advance both North Korea's civil and its military rocket efforts, said missile expert David Wright, a senior scientist at the Union of Concerned Scientists, a science advocacy group in Cambridge, Massachusetts. Wright is co-director of the group's Global Security Program.

"This is the kind of thing you try and build to get more rocket capabilities, whether you're trying to build a ballistic missile or space-launch vehicle," Wright told Space.com.

This new rocket engine is larger than North Korea's previous efforts. In the test, the engine was strapped to a test stand, which is typical for tests of engines that are still in development, Wright said.

North Korea said the new engine produced 80 tons of thrust. If true, that is about 2.5 times as much thrust as the engine used in North Korea's Nodong missile, which produces about 30 tons of thrust and has a range of about 800 miles (1,300 km), Wright said. He noted that North Korea used a cluster of four Nodong engines to power the first stage of the country's Unha satellite launcher, which placed small satellites in orbit in 2012 and 2016.

"The Unha launcher can put maybe 100 kilograms [220 lbs.] into a pretty low orbit, maybe 400 or 500 kilometers [250 to 310 miles]" above the Earth's surface, Wright said. "By increasing the thrust, it allows North Korea to lift satellites to higher altitudes, or to carry a greater payload to longer distances if it is a ballistic missile."

Wright noted that the earlier, Nodong engine was essentially a scaled-up version of the one in the Scud, the Soviet missile that Iraq often used during the Gulf War of the 1990s. Whereas the Nodong used Scud-level propellants instead of ones used in more modern rockets, Wright noted that the color of the flame coming from the new engine in photos of the test suggest that this missile uses more advanced propellants that can generate higher thrust. [Top 10 Space Weapons]

"The surprise has been why North Korea has stuck with Scud propellants for so long," Wright said. "There have been reports for 15 years now that North Korea had bought some submarine-launched missiles from the Soviet Union after it collapsed that used more advanced propellants, yet in all this time, we didn't see them launch missiles with anything but Scud propellant.

"It's possible — and this is pure speculation — that they didn't have the capabilities to produce vast quantities of advanced propellant, which you'd need to fuel these kinds of rockets," Wright said.

To understand what capabilities this new engine might grant North Korea, Wright suggested looking at China's rocket program, which developed engines with similar thrust and propellant to what's found in the new North Korean engine.

Wright suggested North Korea may be advancing its rocket technology along a path similar to China's 40 years ago, which gave that country both a satellite-launch capability and long-range ballistic-missile capability.

For instance, Wright said that North Korea's Unha satellite launcher is similar to China's first satellite launcher. China's subsequent step was to build larger rockets that had greater thrust, such as the YF-20 engine, which produced 70 tons of thrust at liftoff, similar to what North Korea's new engine produces. Ultimately, China used the YF-20 engine not only to launch satellites to geostationary orbit with the nation's LM-3 rocket, but also to help develop the country's first true intercontinental ballistic missile, the DF-5.

Wright also noted that North Korea's Sohae launch facility has a gantry tower — which holds a rocket prior to launch — that is now about 180 feet (55 m) tall. That is tall enough to accommodate China's LM-3 rocket, which was about 140 feet (43 m) tall, but also China's military DF-5 rocket, which is about 105 feet (32 m) tall.

Although North Korea's new rocket engine may be worrisome, "I don't think this changes things much for South Korea and Japan. North Korea already had missiles to reach those countries," Wright said. "And when it comes to the United States, while you hate to see countries, especially ones like North Korea, be able to target heavier payloads to bigger parts of your country, it's hard to imagine North Korea would be suicidal enough to use them."