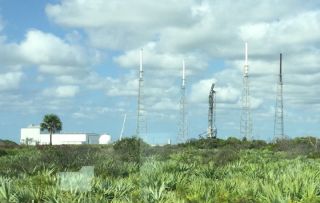 The SpaceX launchpad damaged during a Sept. 1 Falcon 9 rocket explosion on Space Launch Complex-40 in Florida is seen from a distance in this zoomed-in photo captured by Space.com senior writer Mike Wall during a visit to a nearby launchpad at Cape Canaveral Air Force Station on Sept. 7, 2016.
(Image: © Mike Wall, Space.com)

CAPE CANAVERAL, Fla. — The explosion of SpaceX's Falcon 9 rocket last week did a number on one of the launchpads here at Cape Canaveral Air Force Station.

On Sept. 1, the Falcon 9 exploded at Space Launch Complex 40 (SLC-40) during a routine engine test ahead of the planned Sept. 3 launch of the Amos-6 communications satellite. Both the rocket and its payload were destroyed.

The massive fireball appears to have blackened and disfigured SLC-40's strongback support tower and charred one of the facility's four lightning towers.

We got a firsthand look at this damage today (Sept. 7) during the drive to neighboring SLC-41, to see the rollout of NASA's OSIRIS-REx asteroid-sampling spacecraft and its United Launch Alliance Atlas V rocket. OSIRIS-REx is scheduled to launch tomorrow evening (Sept. 8) on a mission to retrieve samples from a potentially hazardous asteroid named Bennu. The mission will launch from Space Launch Complex 41, which is about 1.1 miles (1.8 kilometers) away from the SpaceX pad.

SpaceX representatives have said that the Sept. 1 explosion apparently originated around the Falcon 9's upper-stage oxygen tank. But they're still investigating exactly what happened.

"We are currently in the early process of reviewing approximately 3,000 channels of telemetry and video data covering a time period of just 35 to 55 milliseconds," SpaceX representatives wrote in a statement on Sept. 2.

The Sept. 1 mishap was the second accident involving a Falcon 9 in the past 14 months. On June 28, 2015, a Falcon 9 rocket broke apart less than 3 minutes after lifting off from Cape Canaveral, scuttling a robotic cargo mission to the International Space Station for NASA.

After three weeks of investigation, SpaceX traced the June 2015 accident to a single faulty steel strut in the Falcon 9's upper stage. A Falcon 9 didn't fly again until Dec. 21, 2015, when the rocket successfully launched 11 satellites for the company Orbcomm. The Falcon 9's first stage, meanwhile, came back to Cape Canaveral 9 minutes after liftoff, becoming the first orbital rocket ever to land back on Earth.