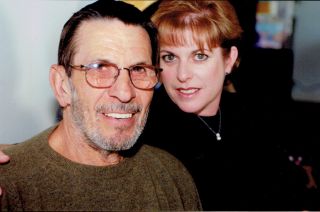 An undated photo of Leonard Nimoy (left) and his daughter, Julie (right).
(Image: © The Nimoy family)

The declining health of Leonard Nimoy — the famous "Star Trek" actor who played Spock in the original series and died at age 83 in February 2015 — comes into sharp focus in a new trailer for "Highly Illogical: A Special Tribute to Leonard Nimoy," a documentary about the disease that killed him.

Nimoy died of complications of chronic obstructive pulmonary disease (COPD), which occurs when the lungs are chronically inflamed and the patient finds it hard to breathe. In a new trailer for the documentary, Nimoy is shown in a wheelchair with an oxygen tank, being transported through the airport in early 2014.

The trailer shows family members repeating Nimoy's reassurance after the paparazzi released photos of him in the wheelchair. At the time, Nimoy urged his loved ones not to be scared. Then he spoke with journalist Piers Morgan publicly about the disease for the first time, in a live television interview. [Leonard Nimoy's Legacy: Obama, Astronauts Pay Tribute]

"I quit [smoking] a long time ago," Nimoy said to Morgan in a clip shown in the trailer. "Why is this happening to me?"

The film is in the final stages of postproduction, with some additional medical and hospital footage being shot right now — as well as some computer animation and graphics. It is expected to be released in November.

"Our main goal for the trailer is to highlight Leonard's personal story and his battle and struggle with COPD," wrote daughter Julie Nimoy and son-in-law David Knight in an email to Space.com.

"In addition, we want to show viewers that the focus of the film is to create awareness and educate the public about COPD. There are a few points we'd like to have the viewer understand. COPD affects millions of people throughout the country. It's currently the third-leading cause of death in the U.S., and if they're a smoker, they should realize that smoking is the main cause of up to 85 percent of patients who suffer from this disease."

The film was funded by individual donations as well as the support from many partners, including the COPD Foundation, the American College of Chest Physicians and the American Association for Respiratory Care.

The film is the second documentary about Nimoy being produced by members of his family. The other one, called "For The Love Of Spock," focuses on his performance career and will be widely released Sept. 9.