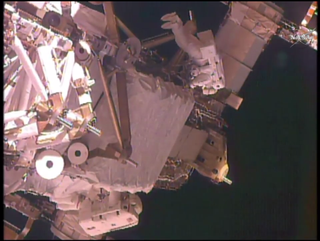 NASA astronauts took a spacewalk outside the International Space Station today (Sept. 1), successfully retracting a thermal control radiator that was no longer in use and installing two high-definition cameras. The team worked well ahead of schedule and was able to complete two additional tasks, too.
(Image: © NASA)

NASA astronauts successfully spacewalked today (Sept. 1), retracting a thermal control radiator that was no longer in use and installing two cameras onto the exterior of the International Space Station.

Jeff Williams, commander of Expedition 48 on the station, and flight engineer Kate Rubins ventured outside of the space station this morning at 7:53 a.m. EDT (1153 GMT). Working very efficiently together, the pair finished all their primary tasks, as well as two additional get-ahead tasks, ending the spacewalk at 2:41 p.m. EDT (1841 GMT).

"Good to be out here," Rubins said as she exited the space station's quest air lock after Williams. This is Rubins' second spacewalk and the fifth of Williams' career. [The 1st American Spacewalk in NASA Photos]

Williams led the way to the far end of the space station to the P6 truss, the point from which the thermal control radiator extends. Retracting this radiator was the primary task of today's spacewalk. While the radiator is not currently in use, it is considered a "high-quality spare" and can be re-extended if needed in the future.

The radiator Williams and Rubins retracted today was taken out of use in 2012 when space station and ground crews were trying to isolate a small leak detected in the coolant system. However, the leak was later found elsewhere and has since been repaired.

Last year, on spacewalk 33, NASA astronauts Scott Kelly and Kjell Lindgren attempted to retract the radiator but were unable to do so at that time.

Using a pistol-grip tool similar to a power drill used on Earth, Williams initiated the retraction under Rubins' close watch. After successfully folding the radiator into its out-of-service position against the side of the space station, Williams and Rubins worked to engage four cinches to lock the piece in place.

The team encountered a few minor hiccups when tightening the bolts, but overall, locking the radiator down into place went smoothly and the team kept moving well-ahead of schedule according to the NASA TV commentator. In order to prevent orbital debris damage, a thermal cover — also known as a shroud — was latched into place over the radiator.

Next, Williams was flown to another point on the station using the station's robotic Canadarm2, which was controlled by Japanese astronaut Takuya Onishi from inside the station. At this location, Williams replaced a light and installed a new high-definition camera that will be used to collect Earth imagery and inspect areas outside the space station. Working well ahead of schedule, Williams was able to install a second camera as well.

While Williams installed the HD cameras, Rubins was responsible for some general maintenance tasks, including tightening support struts of the port solar array rotary joint and removing some multilayer insulation (MLI) from a failed pump-flow-control subassembly. The MLI will be replaced by the station's Dextre robot in the future.

For the final get-ahead task of today's spacewalk, Williams tied down the brake handles on the crew and equipment translation aid (CETA) cart, which helps astronauts move along the side of the space station during spacewalks.

The crewmembers cleaned up their worksites and safely returned to the inside of the space station at 2:41 p.m. EDT (1841 GMT).

Williams and Rubins are part of a six-member space station crew, including Onishi and Russian cosmonauts Oleg Skripochka, Alexey Ovchinin and Anatoly Ivanishin. On Sept. 6, Williams will return home with Skripochka and Ovchinin.